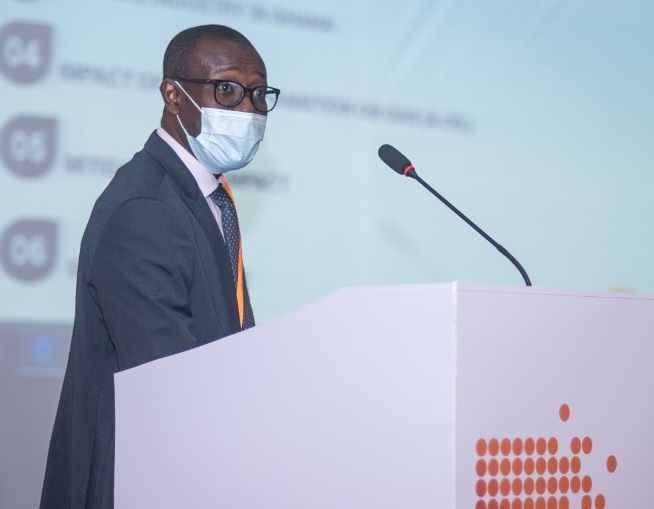 The decision by global financiers to move away from financing dirty hydrocarbons presents a challenge for oil and gas producing countries like Ghana, Manager for Gas Business at Ghana National Petroleum Corporation (GNPC), Mr Hamis Ussif, has said.

He said all over the world, investors continued to move away from financing oil and gas production and every now and then there were reports on a group of financiers or one major financier signalling a stop to financing hydrocarbons.

Speaking at the 7th edition of the Ghana Gas Forum, he said “at the last count, we had about 1500 global managers with trillions of dollars, saying they will not fund dirty fuel.”

He said the investment commitment for renewables had shot up to US$298 billion, while that of fossil fuel hovered around US$130 billion.

“Renewable energy is now gaining momentum, but already, funding commitments is now much bigger than fossil fuels. Global spend on hydrocarbons based power generation continues to reduce, whereas commitments and funding to renewables continues to increase.

“Tesla, a company set up only in 2003 has become one the biggest companies and as at October 26, its market capitalisation reached US$$1 trillion dollars, while we have the likes of Ford, Toyota struggling due to the onslaught of Tesla,” he pointed out.

He explained that the simple reason was that people were eager to move from vehicles fuelled with hydrocarbons to electric vehicles.

Mr Ussif said it was therefore necessary for oil and gas companies around the world to start transitioning into energy companies, something, he said the GNPC was already considering.

“When a company is faced with competitive challenges, the usual prescription is focus on your core where you have the resources and competence to withstand the competition. Unfortunately in this case, the core itself is the problem.”

“For a typical upstream oil and gas company, if you are going to focus on your core, that will be on exploration and production of hydrocarbons and that is where the problem is. So the paradigm is shifting,” he explained.

He said oil and gas companies must therefore adopt the notion of an integrated energy company.

“What we have realised is that, as the transition continues to gain momentum, we are going to have more and more consolidations within the sector. We are not going to see companies stick to their oil business because it is a dying business.”

“We are going to have refocusing of energies on gas because it is a transition fuel and has a bit more time to run than oil. It is cleaner and more efficient and works better on power plants,” he stated.

The Commercial Gas Manager therefore urged companies to pursue the agenda and the opportunities that were in natural gas.

He said on the other hand, with the decarbonisation agenda, people expect GNPC to shun the hydrocarbon resources that would help it meet the energy needs of the country.

“And because of the de carbonisation agenda, you won’t get the usual sources of funding, which are mostly from the global capital market.

“So GNPC is trying to ensure that we maximise the resources that we have as quickly as we can, as we want to ultimately transition into an energy company. The segments of the business keeps shrinking: oil is going to be phased out, gas itself has some respite but over the long term, it would also be squeezed out,” he noted.

He concluded that any oil and gas company that wanted to survive had to look beyond its core business.

He said the oil and gas industry was at a substantial crisis point with relation to raising funds, mainly due to concerns about climate change, but also due to technical challenges in the industry and volatility of the commodity price.

He said Tullow was however confident and strongly believed that there was appetite to finance the growth of continents, particularly Africa through gas.

“We are firm believer as a large investor in Africa and in particular Ghana, that there will be appetite to support that growth in the country and continent,” he stated.

To buttress his point, he revealed that Tullow had been able to raise a US$1.8 billion dollars bond earlier this year, which was four times oversubscribed.

“This is not only a testament to investments in oil and gas but testament for Ghana because all of those investors know their primary investment target is Ghana.

“So we take some comfort and take that as a demonstration that there is still appetite, provided it’s done under the right context and gas is actually one of those transition fuels that creates a lot of excitement for investors,” he stated.

Commenting on how easy it would be to secure financing for exploration of just gas even in the absence of oil, he said that environment has not yet been created for such a focus.

“It is easier to raise money for oil and gas now but it won’t be easy to raise money just for gas production and this may be due to the commerciality of oil.

“The world needs gas but in general the world is over supplied with gas so investors are worried about the lack of commerciality of gas. If you produce a barrel of oil, it will be sold but gas is a little bit difficult,” he pointed out.

He said this was why agreements like the take or pay was sometimes necessary to give confidence to investors that gas could be commercialised.

“In spite of its known environment detriments, it is still easier to secure investments for oil than gas,” he noted.