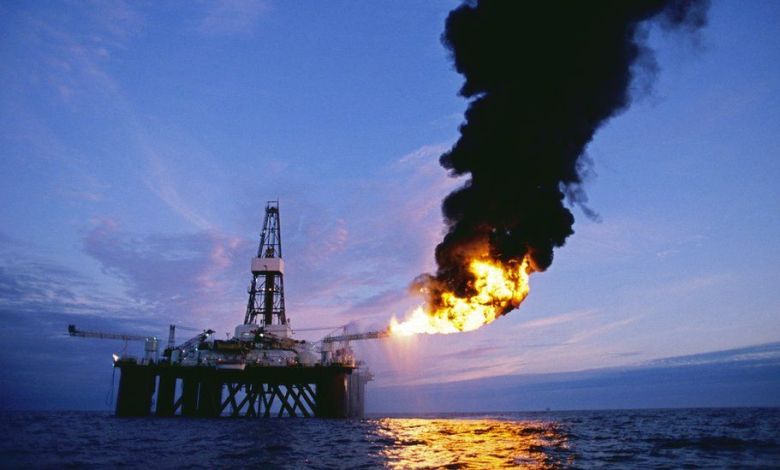 Banks including HSBC, Barclays and Deutsche Bank are still backing new oil and gas despite being part of a green banking group, ShareAction said.

Investors should force banks to demand green plans from fossil fuel firms before funding them, it said.

HSBC and Barclays said they were focused on achieving environmental goals.

“Net zero” means not adding to greenhouse gases already in the atmosphere by cutting and trying to balance out emissions.

If the Earth is to avoid damaging environmental effects, including more extreme weather, it needs to limit average global warming to below 1.5 degrees centigrade.

To achieve this, we need to get to net zero by 2050, experts have said.

As part of getting to net zero, the International Energy Agency has said there should be no new oil and natural gas fields.

But big banks are continuing to fund oil and gas expansion with billions of dollars, ShareAction said, despite being part of a UN-led group called the Net Zero Banking Alliance.

This is a big drop from 2020, when HSBC alone pumped more than $18bn into new oil and gas, and there were big drops in funding across the board between 2020 and 2021, according to figures from consultancy Profundo.

ShareAction said this was due to banks focussing on providing pandemic-related loans to keep fossil fuel firms afloat during the pandemic, and that in 2021 funding returned to pre-pandemic levels.

Since joining the Net Zero Banking Alliance last year, 24 big banks have provided $33bn for new oil and gas projects, with more than half of that amount ($19bn) coming from four of the founding members – HSBC, Barclays, BNP Paribas and Deutsche Bank, the campaigners said.

ShareAction urged big investors to demand that banks restrict finance for oil and gas expansion, saying funding new oil and gas is a lose-lose for banks and investors.

“On the other hand, if demand does not fall enough to limit global warming to 1.5C, the economy will suffer from severe physical climate impacts.

“Either way, value will be destroyed for energy companies, banks and their investors.”

The campaign group added: “Banks say that they want to help their clients to transition away from fossil fuels, but there is little evidence for this claim.”

“Most banks – HSBC included – are not demanding transition plans from clients, raising doubts about their commitment to this transition,” it added.

But an HSBC spokesman said the bank was “committed to working with our customers to achieve a transition towards a thriving low carbon economy”.

The bank published its policy to phase out funding coal for energy production in December, and said its oil and gas net zero financing plans would be published on 22 February in its annual report.

Barclays said it “continues to engage with a broad range of stakeholders on climate and sustainability topics”.

“We continue to focus on our ambition to become a net zero bank by 2050, and our commitment to align our financing with the goals and timelines of the Paris Agreement,” a spokeswoman said.

Barclays has a target of a 15% reduction in financed emissions from energy, including coal, oil and gas, by 2025.

A Deutsche Bank spokesman said: “Carbon intensive sectors account for only a small share of our loan book and based on publicly available data our lending and underwriting activity in fossil fuels is significantly smaller than global peers’.

“Moreover, our aim is to support all of our customers as we transition to a net zero world.”

Deutsche Bank said it was “well under way” to hitting green and social targets of €200bn (£170bn) by 2023, including “an intense dialogue with clients to move from high-carbon business models towards low and no-carbon ones”.

The spokesman added: “We have committed to align the operational and attributable emissions from our portfolio with pathways to net-zero by 2050 or sooner.

“This includes measuring and subsequently disclosing the carbon intensity of our loan portfolio and developing and disclosing plans to adjust its footprint in accordance with national and international climate targets by end of this year.”

BNP Paribas, which was also named in the ShareAction report, said: “As the leading bank in continental Europe, BNP Paribas is a major financier of European energy companies that are largely committed to transitioning their model through strong investments in developing renewable energies.”

The bank said it is “convinced that these players, due to their technical and financial capacities, have the levers necessary to accelerate transition by developing renewable energy and other transformative solutions”.

Meanwhile, oil giant Exxon Mobil said that the International Energy Agency and the UN’s Intergovernmental Panel on Climate Change “agree that significant investment in oil and gas is still needed in Paris-aligned scenarios”.

It said that even in the IEA net zero scenario, “additional investment of approximately $11tn through 2050 would be required in both oil and natural gas development to meet the world’s energy demand”.

BP said it “has a net zero ambition and we have set out a strategy to deliver it”.

“Resilient hydrocarbons are a core part of our strategy, but we are not aiming to grow our oil and gas production – we expect to see production fall 40% from 2019 to 2030.

“We expect to hold investment in oil and gas flat over this decade as output falls, while at the same time expanding our spending in transition growth businesses – including EV charging, convenience, renewables, hydrogen and bioenergy – to around 50% of the total by 2030,” BP added.