Canada’s Oil Province Will Soon Be A Renewable Energy Leader

The Canadian province of Alberta, home of the country’s oil and gas sector for decades, is set to undergo a renewable energy capacity surge in the coming years, attracting investments given its vast natural resources and favorable regulatory landscape.

The country’s total renewables capacity is expected to grow from 19.6 gigawatts (GW) in 2021 to almost 45 GW in 2025, driven primarily by growth in onshore wind and solar energy projects. This is not surprising for a country whose power mix is predominantly hydropower-based, but the region leading the charge is surprising.

The bulk of these additions is set to take place in the western province of Alberta – known as the home of the Canadian fossil fuel industry – which today only holds about 3 GW of renewable capacity. Significant large-scale projects in the region are scheduled to come online this year that will push Alberta’s capacity to close to 10 GW before 2023. That total will double again by 2025, reaching almost 21 GW, nearly half of the country’s total.

This rapid growth will see Alberta race ahead of Canada’s other provinces and take the top spot in the country’s green table, outpacing Ontario – the current leader – with almost double the power generation capacity.

“Canada is no stranger to renewables, but Alberta has been a minor player until now. That’s about to change. The region’s unregulated power market, minimal regulatory hurdles and abundant natural resources make it an attractive prospect for developers, in addition to an existing workforce of industry professionals increasingly eager to adapt to green energy. Other provinces may want to follow suit if they have ambitions to attract lucrative green investments,” says Geoff Hebertson, renewables analyst with Rystad Energy. 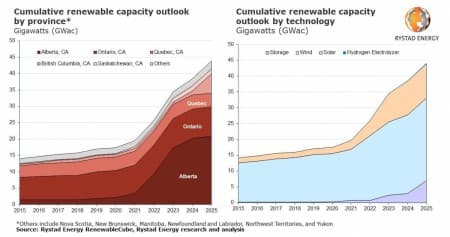 The intentions of Alberta’s decision-makers have been clear for some time, with an ambitious net-zero goal by 2035, 15 years ahead of the national target of 2050, and local authorities have taken concrete steps to achieve this objective. The province has an unregulated power market, similar to the Electric Reliability Council of Texas (ERCOT), which regulates the US state’s grid. This has allowed private investors to seek green portfolios and build capacity faster than in other provinces. However, this can create supply issues during periods of extreme demand, as witnessed during recent freezes and heatwaves in Texas. The province will therefore need to ensure enough system flexibility to support the intermittency of renewable power generation. Although unlikely in the short term, if all gas generation capacity is removed to hit carbon neutrality goals, substantial utility-scale batteries will be required to back up the system.

Alberta’s electricity system is unique as companies can ink deals directly with private power producers to buy a set amount of electricity each year, either for use or for offset credits. This is attractive for fossil fuel companies looking to offset their emissions from existing operations in the province. The financial security provided by those contracts helps producers build out more renewable projects with fewer market risks, while purchasers get cheap renewable energy or credits to meet internal or external emissions goals.

In contrast to Alberta, Ontario, the current renewables capacity leader in Canada, is unlikely to see any significant growth before at least 2025. The province’s lucrative feed-in tariff (FiT) allowed for a massive expansion of developments initially, but it expired in 2016. The introduction of corporate power purchase agreements (PPAs) in Alberta – a contract for a private operator to sell energy straight to the local grid at a set price – has incentivized developers.

Alberta may not be the largest market for renewables capacity currently, but the province’s green portfolio is expected to reach nearly 20 GW of installed solar and wind capacity by 2025. That will far outpace Ontario, which will slip to the No. 2 slot, with only 9 GW.

The Canadian power mix has been dominated by hydropower generation for almost a century, with the first dams constructed in the 1920s. Hydropower has contributed between 60% and 70% of the country’s power needs since 2010, with the remainder predominantly supplied by coal, gas, and nuclear. Total onshore wind generation has grown in recent years but remains relatively insignificant, contributing only about 5% in 2021. With the wind capacity additions expected to come online by the end of 2025, that contribution will jump to almost 9%, or 60 terawatt hours (TWh). Conversely, coal’s role in the power mix is set to drop as the country pushes out the carbon-heavy fuel. In 2010, coal-fired generation provided nearly 80 TWh of power annually, but that gradually dropped to around 30 TWh last year. By 2025, coal is expected to contribute 14 TWh, just 2% of the nation’s power needs. 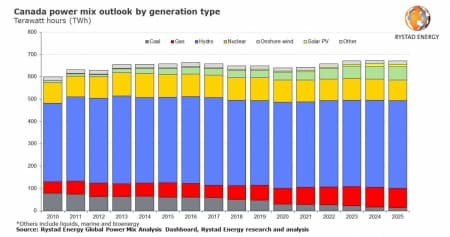