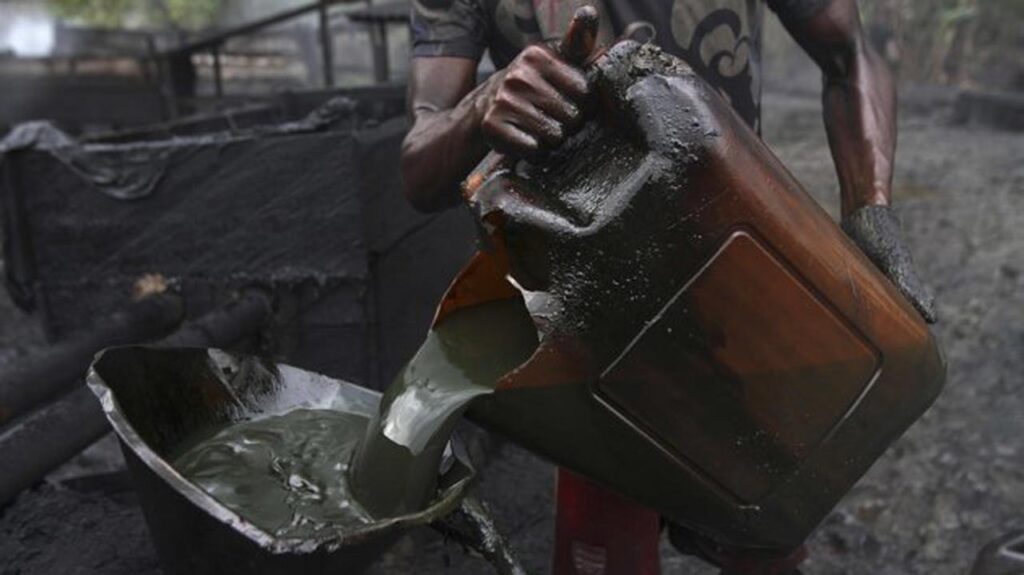 Nearly two years after the Nigerian National Petroleum Company (NNPC) Limited announced plans to reduce the cost of oil production to about $10 per barrel, this effort has been frustrated by recurring oil theft, spiking production costs to at least $32 a barrel.

According to some operators who reluctantly spoke with The Guardian, oil is no longer stolen at the well-heads, as vandals have become innovative, bypassing the anti-ballistic pipelines to disrupt production.

Indeed, they have raised concerns about the culpability of the nation’s security agencies, noting that barges of oil could not have been stolen and moved on the coastal waters without collaboration of some powerful Nigerians.

The operators noted that Nigeria’s operating expenses lack competitiveness as the country, in 2019, had one of the highest production costs with break-even price for major proposed projects hovering at $48/bbl, higher than Angola’s $45 and Uganda at $44/bbl.

This necessitated the move for lower oil production costs in 2020, specifically, the $10 a barrel target. Now described as ‘organised crime’ and a national disaster, most stakeholders insist that crude oil theft, especially in the Bonny Terminal Network, Forcados Terminal Network and Brass Terminal Network, is now creating crude oil loss of about 91 per cent, meaning that the cost of production in those cases already stand above actual oil price, which hovers around $120 per barrel.

This puts the figure to about N1.36 trillion when converted to naira with the official N416.25 to dollar exchange rate, a development that has forced the country’s crude oil production to go way below quotas by Organisation of Petroleum Exporting Countries (OPEC) and benchmark in the 2022 budget.

The Guardian gathered that only five per cent of all the crude oil that were pumped through the pipeline between October 2021 and February 2022 were received by producers. The rest were lost to illegal oil bunkering, a problem that seems to have taken a turn for the worse since global oil prices skyrocketed.

Voicing his frustration over the problem, Tony Elumelu, who owns huge stakes in Tenoil, in a series of tweets earlier last week, said: “Businesses are suffering. How can we be losing over 95 per cent of oil production to thieves? Look at the Bonny Terminal that should be receiving over 200,000 barrels of crude oil daily, instead it receives less than 3,000 barrels, leading the operator, Shell to declare force majeure, which has taken a toll on their businesses.

“Why are we paying taxes if our security agencies can’t stop this? It is clear that the reason Nigeria is unable to meet its OPEC production quota is not because of low investment but because of theft, pure and simple!”

Also last week, another stakeholder and founding Managing Director of Seplat Petroleum, Austin Avuru, released a report in which he warned that oil production in Nigeria is now in an emergency, critical state, due to oil theft.

In the report, titled, “Reining in the Collapse of the Nigerian Oil Industry,” Avuru disclosed that some oil producers no longer get to see as much as 80 per cent of their production making it to the terminals. He also urged the authorities to do something about the problem.

Despite the existing heavy presence of tankers across roads in Nigeria lifting oil products and other goods, crude oil producers are now adopting the option of trucking crude as multiple sources confirmed to The Guardian, that the average cost of producing a barrel of crude oil is now $32 per barrel. This makes Nigeria one of the countries with the highest cost of crude oil production in the world.

Beyond taxes, industry insight showed that high expenditure driven mainly by high number of personnel (including security agencies), logistics and handling costs had pushed the unit operating price of oil to $20/bbl pre-Coronavirus.

A breakdown of associated expenses in the industry showed that of the over 70 per cent operating costs, human resource services account for 38 per cent, logistics 19 per cent, 13 per cent for direct handling and nine per cent direct lifting among others.

The NNPC equally spent N32.56 billion on pipeline security and maintenance cost within the first seven months last year, above the N29.6 billion budgeted for the year, reflecting a rising incident of vandalism and frequency in maintenance. Stakeholders believe the costs must have risen, even as they await the latest report from the oil company.

The operators told The Guardian that crude oil theft is killing Nigeria’s oil business, as it is no longer sustainable. The upstream challenges have forced operators to consider divestment, just as they added that the amnesty programme was no longer yielding results for the country, as it has remained another conduit for corruption going by the number of leakages and vandalisation in the region.

They noted that the ammunition being used to vandalise the pipelines should not be accessible to militants who have submitted weapons under the amnesty programme.

While most IOCs are already divesting from the country, especially in the shallow water, where pipelines are mostly used, the fear of the IPPG, who are mainly indigenous companies are that the prevailing insecurity situation in the oil region remained a disincentive to needed investment to operate the assets and a snag to the nation’s revenue production.

Insisting that there is a need to measure the exact losses through metering, Chairman and Chief Executive Officer of NUPRC, Gbenga Komolafe, who had noted that the prevailing level of crude oil theft in the country is now a national threat and organised crime, stated that government is making serious move to activate the house community fragment of the Petroleum Industry Act.

He admitted that government revenue is adversely affected as revenue accruing to the operators is impacted negatively while there is now surging cost due to frequent repairs of damaged facilities amidst oil spillages and leakages, fueling environmental degradation and deprivation of source of livelihood to indigenous communities.

While the Rivers State governor, Nyesom Wike, had pointed to involvement of key security and government officials being involved in the menace of crude oil theft, the regulator confirmed the development, blaming stakeholders compromise, inadequate security, poor community engagement, poor surveillance and other factors as triggers.

A leading geologist and publisher of Africa Oil and Gas Report, Toyin Akinosho, highlighted the fact that the bulk of crude being stolen meant that cost of crude oil production remained unreasonably high even as operators still had to keep their entire staff regardless of the income.

“If you have to barge your crude and pay sundry tariff to Customs, Navy and the creek boys doing gate-keeping despite the presence of security operatives, what does that translate to? If you have to keep 40 battalions of the Nigerian Army just to guard your facilities at different oil fields (something that wasn’t happening until 18 years ago), what does that translate to? You don’t talk about high production costs from the air. You see the production costs in these things,” Akinosho stated.

He equally decried that the tariff that the NUPRC is charging for services are equally going up while sundry bits of corruption by NNPC and other regulatory agencies for processes add up to the cost.

The Chairman of IPPG, Abdurazaq Isa, who had told The Guardian that the huge cost incurred on security was also adversely affecting Unit Operating Cost (UOC) targets of $10 per barrel, noted that in December 2021, some operators lost 91 per cent of the crude they put in the line, the figure went down to 75 per cent in January this year and stood at 82 per cent last month.

BUT Waziri Adio, former executive secretary of the Nigeria Extractive Industries Transparency Initiative (NEITI), noted that oil theft is not the only reason for the underperformance of the petroleum sector.

Last Wednesday, a Federal Government team visited a site in Rivers State where they said oil theft was going on. The delegation was led by the Minister of State for Petroleum, Timipre Sylva.

Commenting on the development, yesterday, Adio commended government for finally taking the issue more seriously, noting “the increasingly audacious and humongous theft of crude oil and refined products poses a multiplicity of threats to oil companies and all tiers of governments, to the environment, to the livelihoods of citizens and communities, and, most importantly, to national security.”

However, he said: “It is important to go beyond clever soundbites and photo-ops. It will also be necessary not to return to the same measures that have proven grossly ineffective over the time, and not to succumb to schemes designed merely to take advantage of the situation.”

Adio, who presided over NEITI between 2016 and 2021, said it is critical to get the accurate figures of the theft as a starting point.

“There have been screaming headlines and viral tweets that between 80 per cent and 95 per cent of Nigeria’s crude oil is lost to oil thieves. This cannot be true. Anyone with little familiarity with the sector should question the figures being touted.

“Nigeria’s oil production figures can easily be accessed locally and internationally. Our oil production, minus condensates, has hovered between 1.2 million and 1.4 million barrels per day for some time now, due to reduced OPEC quota and other factors.

He said as serious as the issue of oil theft is, “we don’t need to sex up the numbers or encourage misrepresentation.”
ALSO, the Human Rights Writers Association of Nigeria (HURIWA) yesterday, lambasted the Federal Government over its disclosure that about $3.27 billion worth of oil had been lost to theft in the last 14 months.

It noted that the government, having indicted itself with the revelation, should speedily ensure that the economic saboteurs in government and outside government were named, shamed and prosecuted for deterrence purpose.

HURIWA, in a statement by its National Coordinator, Comrade Emmanuel Onwubiko, said the disclosure by the government was useless and was of no benefit to Nigerians.

The group also said the outrageous amount lost to oil thieves amid fuel scarcity for about two months in first quarter of 2022 showed the obvious failure of Buhari, who should quickly quit as Minister of Petroleum Resources.

He said: “How can Nigerians be in the midst of plenty and still suffer incurable and perpetual scarcity because of the leadership failure of some people? The President should resign as Petroleum Minister having demonstrated gargantuan incompetence.”

Reacting to the NUPRC report of crude oil theft leading to the loss of $3.27 billion worth of oil in the last 14 months, HURIWA slammed the Minister of State for Petroleum Resources, Timipre Sylva, as well as all agencies involved, including NUPRC, NNPC and the Nigerian Midstream and Downstream Petroleum Authority for failing Nigerians by allegedly covering the theft for 14 months.