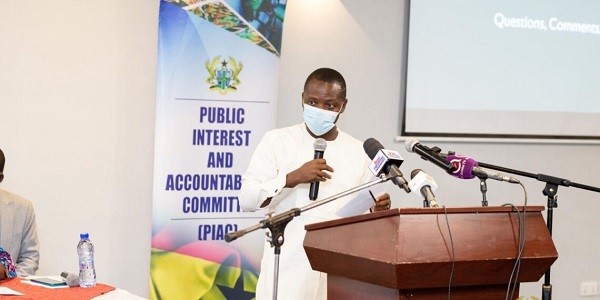 The Technical Director of the Public Interest and Accountability Committee (PIAC), Mark Agyemang, has asked the parties involved in the Eni and Springfield unitisation directive to come to the negotiation table and appoint an independent assessor to reassess the two hydrocarbon communication fields, the Sankofa and Afina, and present the data to the parties.

In April 2020, then Energy Minister John Peter Amewu wrote to ENI and Springfield, directing them to execute a Unitisation and Unit Operating Agreement (UUOA), with respect to the Afina discovery in the West Cape Three Points (WCTP2) and the Sankofa field in the offshore Cape Three Points (OCTP) contract areas.

The purpose of executing the UUOA is to give full effect to government’s directive to unitise the Afina and Sankofa fields, and the subsequent imposition of terms and conditions for the unitisation of the Afina discovery and the Sankofa field.

The directive follows previous engagements and analysis of the post-drill data by the Petroleum Commission (PC) and the Ghana National Petroleum Corporation (GNPC), which confirmed that the Afina discovery in the WCTP-2 and the Sankofa field in the OCTP contract areas were one and the same. That is to say, the Sankofa Cenomanian Reservoir extended into the WCTP-2 contract area.

In an interview with Business24, Mr. Agyemang said unitisation is not a bad thing as it’s a strategy to save cost through facility and development cost.

“Parts of the Jubilee Fields have been unitised.  The good thing is that there are already existing infrastructure there – that’s the Eni facilities; so we can just tap into that and then use them to develop the fields,” Mr. Agyemang noted.

“Eni is asking that they should be granted permission to go to Springfield data room but Springfield is refusing that that,” he said.

He said government in the scheme of all these happenings decided to let GNPC to do the assessment and establish the interconnectivity of the two reservoirs.

He said Eni has more experience, financial muscles and technical capacity as they are already producing on the field, so they should come to the negotiation table and resolve the issue amicably.