Exxon’s Big Bet On Guyana Is Starting To Pay Off

After commencing exploration drilling in offshore Guyana in 2015 the world’s second largest publicly listed oil company by market cap ExxonMobil experienced stunning success. In little more than six years Exxon has made 22 high-quality oil discoveries in the 6.6-million-acre Stabroek Block, the latest being at the 5,938 feet Pinktail well, located nearly 22 miles to the southeast of the Liza phase 1 development. Hess, Exxon’s partner, with a 30% interest in the Stabroek Block announced the successful appraisal of the Turbot oil discovery in the block at the 5,790 feet Turbot 2 well 37 miles to the southeast of Liza phase 1. 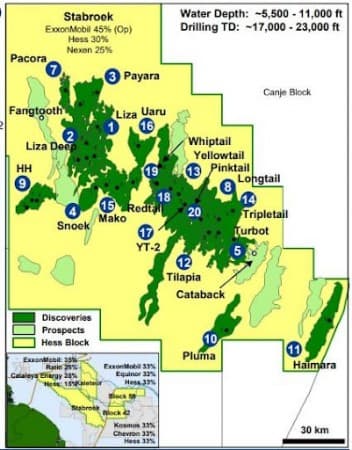 Those latest discoveries along with earlier ones made during 2021 will boost the already discovered estimated recoverable resources of 9 billion barrels in the Stabroek Block.

This positive news highlights why Exxon, after an extremely difficult 2020, at the end of last year announced it was prioritizing investment in offshore Guyana. The Stabroek Block has proven to be a bonanza for Exxon, which is the operator and owns 45%, as well as partners Hess and CNOOC which hold 30% and 25% respectively. By the end of 2020, Exxon’s Liza phase 1 development had reached full capacity pumping 120,000 barrels per day. Even April 2021 operational issues concerning a gas compressor at the Liza Destiny FPSO, which caused crude oil output to plunge by 75% to 30,000 barrels per day, have done little to impact long-term production. By May production had returned to capacity after reaching around 110,000 barrels per day before the end of April 2021.

Exxon is focused on bringing the Liza phase 2 development online. The Liza Unity FPSO, which will be utilized for Liza Phase 2, set sail from Singapore to Guyana earlier this month and is expected to commence operations in early 2022, adding another 220,000 barrels per day of production capacity. Exxon is also working on the Payara project, which is expected to commence operations during 2024 adding a further 220,000 barrels per day to production to the Stabroek Block. By 2026 the energy supermajor anticipates pumping 750,000 barrels of crude oil daily from the block, although that number could be higher, perhaps closer to 1 million barrels, because of the four petroleum discoveries made since the start of 2021.

The Stabroek Block is a very attractive and profitable operation for Exxon and its partners. Liza phase 1 is breaking even $35 per barrel Brent placing it at the lower end of the global scale with the lowest being in the Middle East where oilfields on average breakeven at around $27 per barrel. Such a low breakeven price makes the Stabroek Block competitive with other South American oil producing jurisdictions. Suriname and Brazil have breakeven prices estimated to be at around $40 with some analysts predicting they could be lower than $35 per barrel. Exxon’s partner in the Stabroek Block Hess believes that when Liza Phase 2 commences operations during 2022 it will breakeven at $25 Brent, one of, if not the lowest breakeven price for any oil asset in Latin America. The breakeven price will fall further, as has occurred in nearby Brazil, as additional crude oil discoveries are developed and the required operational infrastructure is established.

The quality of the crude oil being pumped from the Stabroek Block is another reason for the rapidly rising popularity of offshore Guyana. Liza crude oil is light and sweet with an API gravity of 32 degrees and 0.58% sulfur content. While Liza has a pour point of 32 degrees Fahrenheit, indicating it is high in paraffin, the crude oil variety is relatively low in sulfur, metals and other contaminants, particularly compared to Venezuelan, Colombian and Ecuadorean grades. As a result, Liza crude oil is less carbon intensive, easier and cheaper to refine making it a more attractive petroleum resource to exploit in a global economy which is focused on sharply reducing carbon emissions.

Those significant positive characteristics are enhanced by the petroleum sharing agreement which Exxon was able to secure on very favorable terms with Guyana’s national government in Georgetown. While there are has been considerable speculation about it being an unfair deal for Guyana which is open to being renegotiated, the government of Irfaan Ali has previously stated it will remain intact. Exxon and its partners in the Stabroek Block, are the only energy companies operating in offshore Guyana to have enjoyed such astonishing drilling success. The block’s considerable estimated recoverable petroleum resources of around 9 million barrels, combined with a notable number of recent oil discoveries point to its considerable petroleum potential. As the latest announcement concerning the Pinktail discovery demonstrates, even the recent slew of dry holes have had little impact on Exxon’s performance. For these reasons, offshore Guyana will soon become a leading driver of production and profit growth for Exxon.