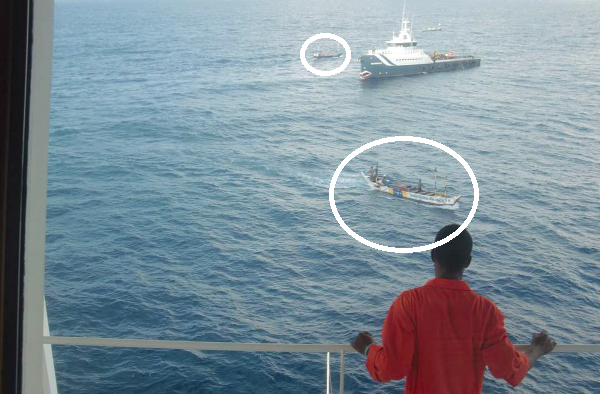 The increasing activities of fishermen within the restricted zones are becoming a threat to the three offshore oil fields – Jubilee, Tweneboa, Enyenra and Ntomme (TEN) as well as the Sankofa. According to the PC, that was happening even though the commission had regularly engaged the fishermen on the dangers of their activities.

Dangers
Many of these fishermen sail to these fields, fish, use the production lines and tie their canoes to anchor chains of the production platforms. Since the fishermen spend days during their expeditions, they set naked fire to cook with complete disregard for safety protocols.

Speaking at a virtual stakeholders meeting on the seriousness of the practice, the Chief Executive Officer of the Petroleum Commission, Mr Egbert Faibille Jnr., stated that since the commencement of the country’s oil exploration, one of the key challenges had been the frequent and increasing incursions with its associated dangers.

At the meeting, the Petroleum Commission and the Joint venture partners of the Jubilee and TEN Projects, Ministry of Energy, National Canoe Fishermen Council and other agencies discussed the implementation of the Safe Sea Access Framework and the establishment and operationalisation of the cumulative impact co-management platform secretariat to be hosted by the commission.

The engagement was part of the Petroleum Commission’s mandate to ensure sound community relations and to promote a harmonious operating environment within the country’s upstream oil and gas sector.

The chief executive officer said to ensure that every stakeholder within the maritime domain co-existed, there were clear advisory and exclusion zones established, and enough sensitisation to the need to stay off the restricted area.

“ However, some fishermen from the communities along the coast on fishing expeditions continue to flout it,” he said.

Mr Faibille said over the past five years, more than 32,000 incursions had been made.

“These breaches do not only place fishermen in grave danger but unnecessarily put critical offshore facilities and infrastructure at risk,” he stated.

Mr Faibille said one of the critical interventions –  the Safe Sea Access Framework (SSAF)  – was borne out of a study which formed part of the Marine Fisheries Advisory Committee (MFAC)’s Action Plans to ensure strategic co-existence of the oil and gas, and fisheries sectors.

The Head of the Health and Safety Department of the commission, Mr Jeffrey Kyei-Baffour,  explained the implications of incursions into the safety zones and called for the need for sustained interactions for fishermen to stay off the restricted area.

He noted that the rate of incursions this year had  seen a sharp increase compared to previous years and warned that “If not checked, it could lead to devastating consequences for all stakeholders”.

On the Cumulative Impact Co-Management Platform, the Head of Community Relations, Ms Nana Ekua Sekyiwa Darko, stated that the objective of the platform was to facilitate a coordinated approach to the effective management of cumulative impacts of offshore oil and gas project development and associated facilities in the Western Region.

She underscored the need for more engagement to ensure that the fishing community was fully bought into the framework to ensure safe and harmonious coexistence of all.

In April 2019, stakeholders including canoe fishermen and other players in the country’s upstream oil and gas industry unanimously adopted the recommendations in the framework for a more integrated Cumulative Impact Management in their respective activities by adhering strictly to safety and good environmental practices for increased productivity.

The framework was borne out of a study to explore and evaluate the extent to which marine environmental challenges could be linked to and or mitigated by oil and gas industry actions.