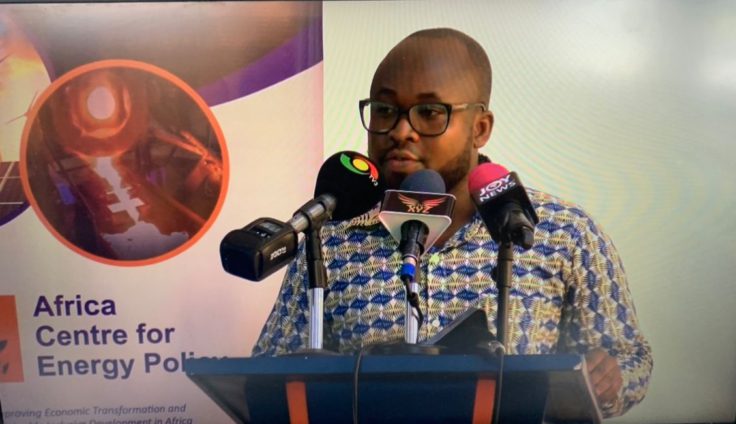 The African Centre for Energy Policy (ACEP) is alleging that the Ghana National Petroleum Corporation (GNPC) is seeking to assign an interest in some of Ghana’s oil blocks to Jubilee Oil Holdings, a company registered in the Cayman Islands.

ACEP claims its checks have revealed that this company is registered with Dr K. K. Sarpong, CEO of the GNPC and Freddie Blay, Board Chairman of GNPC as directors.

These allegations were levelled by ACEP’s Policy Lead for Petroleum and Conventional Energy, Kodzo Yaotse, at a news conference.

The alleged transaction relates to GNPC’s quest to acquire 7% Commercial Interest in the blocks.

GNPC in 2021 announced moves to acquire the said interest, adding that it will be transferred to GNPC’s subsidiary, the GNPC Exploration and Production Company (GNPC Explorco).

ACEP however claims it has discovered that GNPC rather intends to assign the interests to Jubilee Oil Holdings.

“ACEP’s search has not yet ascertained beneficial owners of Jubilee Oil Holdings. It is important to note that the representation of the CEO and Board Chair of GNPC, with their names in the General Registry of Cayman Islands, is not enough proof that GNPC is the owner of the Jubilee Oil Holdings.

However, in the absence of evidence on shareholders of Jubilee Oil Holding, we proceed with the assumption that GNPC owns the company.

While the Corporation has not provided public information on the strategic essence of this approach, the unofficial explanation received by ACEP indicates that the Corporation intends to use the offshore company to pay off the loans for the acquisition before the interest reverts to Explorco,” Mr Yaotse said.

ACEP is also questioning how some $199 million GNPC needs to finance the acquisition will be obtained.

“In the absence of official information on the financing options from GNPC, speculations are rife. In October 2021, Africa Intelligence reported that GRA, by extension, the Finance Ministry intends to lend the tax settlement amount from the Oxy transaction to GNPC to offset the acquisition cost of the 7% interest with no recourse to the Petroleum Revenue Management Act (PRMA), Act 815 as amended.

The PRMA, since its inception, has suffered many accountability challenges. But for any revenue to be encumbered outside the express dictates of the law, will be the final nail in the coffin of the Act, a precedent that will undermine the very existence of the Act.

There is no individual, institution or authority clothed with the power to appropriate petroleum revenue outside the PRMA, even if the act can be justified as necessary,

Should Finance Ministry Lend to GNPC?

The answer is a simple no. In the current economic context of high-interest rates and the weak primary balance of the country, a more optimal and innovative approach to financing the 7% interest is required.

ACEP appreciates that GNPC is broke, and its weak financial position exposes it to a high cost of capital.

However, given that the Jubilee and TEN fields are producing assets, they could be leveraged, especially through creditworthy partners to finance the acquisition. Any percentage of savings through innovative approaches is better than using tax revenue needed for the national budget in an austere period.

Borrowing by the Finance Ministry at a higher cost for GNPC will not reflect the difficult picture on revenue painted in the 2022 budget,” he said.

GNPC and government are yet to comment on these allegations.