Oil prices have tanked over the past two weeks, suffering from fears of additional OPEC supply hitting the market, the shattering of demand optimism over Delta variant fears, and unfavorable fuel inventory data.  WTI was trading at $65.99/bbl early Tuesday, with Brent at $68.24, levels they crossed two months ago.

That marks a sharp trend reversal after taking out multi-year highs just weeks ago, which naturally begs the question of whether the oil price run-up had run too far, too fast.

The oil bulls will be happy to hear that oil prices still have upside when measured against gold. 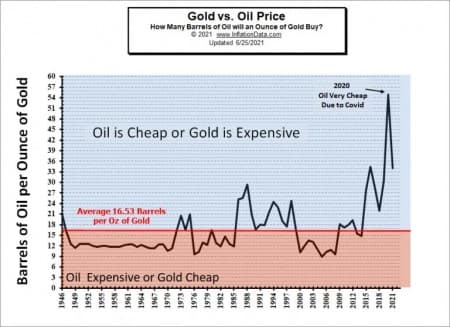 Oil and gold are two of the world’s most-watched commodities, and it’s hardly surprising that where one goes the other frequently follows.

In a recent research note, Morgan Stanley’s Martijn Rats and Amy Sergeant have said that although the oil-gold ratio has historically been a poor indicator of future oil prices, it can still be of interest to investors seeking guidance on the direction of oil prices.

So, how’s that trending?

We can go back and see the number of barrels of oil a single ounce of gold could buy at any point in time i.e., barrels per ounce.

Looking at more recent timeframes, in 1998, oil was cheap while gold was relatively expensive. In 1999 -2000, oil climbed 66% while gold was basically flat. In the early 2000s, gold was once again relatively very cheap, and it went from $271 in 2001 to $1,669 in 2012 when oil was cheap again. Remember, these are just average annual prices, meaning an investor wouldn’t need to get their timing exactly right to hit them.

We could, therefore, argue that as bad as the 2014 oil price crash was, it merely represented a reversion to the mean, whereas the 2020 selloff was massively overdone.

The gold outlook remains uncertain, with rising inflation numbers supporting a gold rally but an increasingly hawkish Fed threatening to stop the party.

Assuming gold prices remain stable at the current $1,821 per ounce, oil prices would need to climb to $110/bbl for the gold-oil ratio to return to its historic median.

Suddenly, Bank of America’s recent prediction that oil prices could hit $100 per barrel in 2022 does not appear so far-fetched.

However, the oil markets still have to climb another major wall of worry, with investors facing another potential nemesis: Rising inflation.

President Joe Biden has lately sought to soothe fears that rising inflation could hurt the U.S. recovery and undermine his $4tn spending plans. This comes after U.S. inflation for the month of June accelerated to the fastest clip since 2008, as the economy continues to recover following the Covid-19 related lockdowns.

According to the Labor Department, the consumer-price index (CPI) climbed 5.4% Y/Y in the month of June while the core price index–which excludes food and energy–increased 4.5% Y/Y. Rising inflation is being driven by demand for goods and services outpacing the ability of companies to keep up with supply-side bottlenecks hampering diverse industries, including semiconductors and the solar sectors; significant stimulus funding as well as a surge in the U.S. personal savings rate.

Republicans have already seized on the alarming inflation trend to oppose Biden’s ambitious spending plans saying the country can ill-afford additional government spending proposals that might juice the economy.

The Biden administration will probably be feeling a little jittery about high oil and gasoline prices not only because of the role that oil has historically played in dictating inflation trends but also because of the risk they pose to his future political ambitions.

Oil prices and inflation are connected in a cause-and-effect relationship. As oil prices climb, inflation tends to follow in the same direction higher. On the other hand, inflation tends to fall in tandem with falling oil prices. That’s the case because oil is a major input in the economy, and if input costs rise, so should the cost of end products.

Thankfully, the oil-inflation nexus has weakened considerably since the 1980s.

Still, the Biden administration could start fretting about high oil prices because it’s a well-known fact that gas prices have an outsized impact on consumer psyches.

Gas prices currently sit at $3.16 per gallon nationally. While that is only about 20 cents higher than the average during the last 10 years, it’s a full dollar higher than prices last year.

The price correlation between crude and gasoline has changed quite a lot over the years–in ways that do not favor the consumer. Most states have raised gas taxes, refiners face new rules that add cost, and there’s a shortage of drivers for the trucks that deliver gas to filling stations.

“One-hundred-dollar oil today could get us close to the $4 per gallon mark,” says petroleum analyst Patrick De Haan of GasBuddy.

The $4 threshold is regarded as an unmistakable pain point for drivers, with $4.17 being the record high for gas prices after oil prices hit $145/bbl in the summer of 2008.