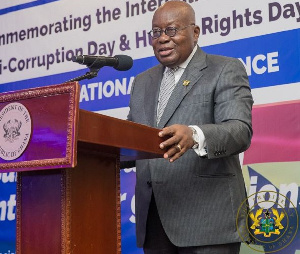 Akufo-Addo said this will be done by enhancing local capacity in various aspects of the management of the industry, according to reports by Citi News.

The President added that more people are currently undergoing training ahead of time, to have huge participation of Ghanaians in the industry in the coming years.

He was speaking at a send-off ceremony for some eight (8) individuals travelling to Canada for oil and gas training. Addressing the participants, he reiterated that government will continue to invest in the human resource of the country

“The skills enhancement of Ghanaians in the industry is absolutely critical. We can no longer count on them [foreigners], we have to count on ourselves. That is why the initiatives that are taken in the sector, the efforts of GNPC in trying to develop a greater capacity to be able to be an operator of fields and enhancing the skills of Ghanaians in the technical aspects of the industry are conjoined. They are part of the same process and absolutely essential for the future of our country,” he said.

Last year, the Ghana National Petroleum Corporation (GNPC) acquired a 7 percent commercial interest in both the Jubilee and TEN blocks, from Occidental Petroleum (OXY) for $199 million which took effect on April 1, 2021.

“Consideration due OXY at completion was approximately USD165 million after taking into account closing adjustments,” GNPC said in a statement.

OXY had prior to this transaction acquired the Ghana assets of Anadarko.