Guyana’s Oil Industry Is In For A Stellar Year 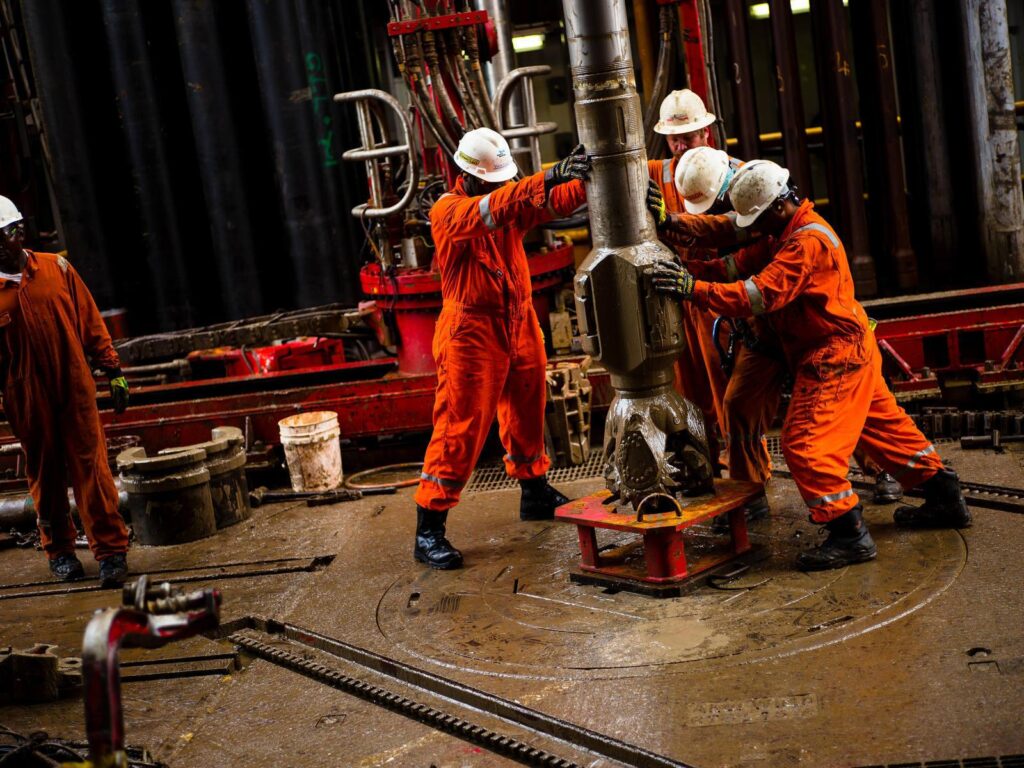 ExxonMobil made its first world-class oil discovery in Guyana’s territorial waters in 2015. Since then, the energy supermajor has made over 30 high-quality oil discoveries in the 6.6-million-acre Stabroek Block which Exxon estimates holds at least 11 billion barrels of recoverable oil resources. Those discoveries have triggered an extraordinary energy boom, with Guyana emerging as a world-recognized petroleum producer. By the end of 2022, the former British colony was pumping an average of 360,000 barrels per day and ranked 17th globally by oil reserves. Guyana’s territorial waters are believed, by the government in Georgetown, to contain over 25 billion barrels of oil resources, underscoring that there are further world-class oil discoveries ahead. This tremendous hydrocarbon endowment is proving to be a boon for Guyana’s economy. There is every indication that unlike neighboring Suriname, which shares the Guyana-Suriname Basin and hit some difficulties, Guyana’s burgeoning hydrocarbon boom will power ahead during 2023.

Offshore Guyana, in as little as seven years, has emerged as the world’s hottest frontier oil play. It is attracting considerable attention from foreign petroleum companies seeking to boost their reserves and production with lighter, sweeter crude oil, which has a relatively low carbon intensity to lift. Guyana’s appeal to energy investors is bolstered by favorable geology, growing petroleum infrastructure and low breakeven prices that are estimated to be at around $35 per barrel. While the government in Georgetown has made it clear that oil companies will not be obtaining production-sharing agreements on excessively advantageous terms as the Exxon-led consortium did with the Stabroek Block, Guyana still has an attractive regulatory regime. Under the revamped PSAs oil companies will pay a 10% royalty, one of the lowest in South America, on all petroleum produced and sold. There is also a 50% split of oil profits with Georgetown and a 10% corporate tax.

The updated PSA forms part of the government’s plans to promote Guyana’s offshore oil industry while boosting the country’s cut of oil revenues, which will bolster an already rapidly growing economy while funding the development of crucial infrastructure. Key to Georgetown’s plans to drive greater foreign interest and investment in offshore Guyana is the first-ever oil auction announced by the Ministry of Natural Resources in December 2022. The bid round sees a mix of 14 shallow and deepwater blocks on offer to oil companies.

The three deepwater blocks are situated east of the Kaieteur Block and north of the Canje Block in an area that is believed to be highly prospective with considerable petroleum potential. The deepwater Kaieteur and Canje Blocks, which are adjacent to the prolific Stabroek Block, are operated by Exxon, which holds a 35% interest in each block. Despite disappointing drilling results, Exxon is pressing ahead with a drilling campaign to identify and delineate what is believed to be the considerable oil potential held by the blocks. The hydrocarbon fairway is thought to extend into the three neighboring deepwater blocks being auctioned. There are also 11 shallow water blocks close to Guyana’s coast which resemble the offshore shallow water bid round held by Suriname in 2020. 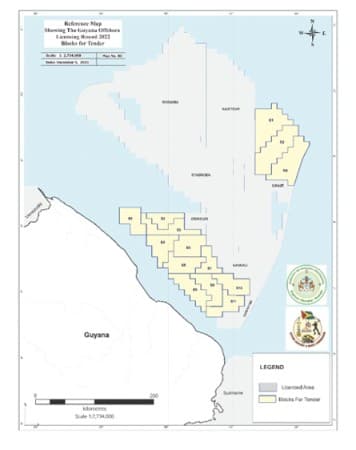 The auction closes on 14 April 2023 with the blocks for successful bids to be awarded during the second quarter 2023. Energy companies can bid on as many blocks as they wish but a maximum of three blocks will be awarded to a single company. Upon signing a $10 million signing bonus is payable for shallow water blocks which increases to $20 million for the three deepwater blocks. Successful bidders must provide developments programs and present guarantees for the planned work which if not completed could see penalties imposed by Georgetown and even the acreage being reclaimed.

According to Reuters, Guyana’s oil auction is attracting considerable interest with major energy companies from Asia to Europe reviewing the opportunities available. President of Exxon’s Guyana subsidiary, Alistair Routledge, told Reuters that the energy supermajor is considering whether to bid on the blocks. The deepwater blocks on offer are a natural fit with Exxon’s existing stakes in the neighboring Stabroek, Canje and Kaieteur Blocks where it is the operator.

The scale of Guyana’s oil boom and the boost it is giving to the impoverished South America country’s economy is nothing less than phenomenal. In a period of seven years, since Exxon’s first 2015 oil discovery, Guyana has emerged as a major regional oil producer and is on track to become a top-tier global petroleum exporter. The former British colony’s reserves are steadily growing. S&P Global recently calculated that more than 15 billion barrels of oil have been discovered in Guyana’s territorial waters since Exxon’s 2015 Liza find. Petroleum reserves will expand at a solid clip if the current rate of exploration success continues, which is highly likely when the considerable capital being invested in offshore Guyana is considered.

Guyana’s oil production is rapidly expanding. Exxon projects installed capacity in the Stabroek Block will reach 830,000 barrels per day by 2025 when the 250,000 barrel per day Yellow Tail development comes online. The energy supermajor also forecast that Guyana’s petroleum output will hit one million barrels per day by 2030. Industry consultancy Rystad Energy estimates Guyana will be pumping 1.7 million barrels per day by 2035, which is higher than other major offshore basins including the Gulf of Mexico, ranking the country as the world’s fourth largest offshore oil producer. S&P Global predicts existing oil discoveries are sufficient to drive production to two million barrels daily by 2035, with any additional finds likely to lift that number even higher. Growing foreign investment in Guyana’s hydrocarbon sector coupled with the building-out of crucial industry infrastructure will unleash the basin’s full potential leading to additional discoveries and rising oil reserves as well as production.

Rapidly rising oil production will significantly boost government revenue and Guyana’s economy. Finance Minister Ashni Singh stated 2023 petroleum revenue will grow by 31% year over year to $1.63 billion. Rising fiscal income from royalties and oil exports will allow Georgetown to fund additional investment in critical industry infrastructure including deepwater ports, natural gas fired powerplants and oil refineries. As those assets come online, they will drive even greater investment in exploration and development activity while helping to reduce operating costs and breakeven prices. Guyana’s massive oil boom is responsible for notable increase in economic growth. Guyana’s 2021 gross domestic product expanded by a notable 23.8% and then a whopping 57.8% for 2022 with 25.2% forecast for 2023. That stunning rate of economic growth will continue as Guyana’s oil boom accelerates with foreign energy investment pouring into what is described as the world’s hottest frontier oil play.