A week ago, the Energy Information Administration (EIA) released its latest Short Term Energy Outlook (STEO) wherein it revised its 2022 and 2023 oil production outlook. The EIA revised 2022 U.S. crude oil supply higher by 80 thousand barrels per day (kb/d) to 11.828 million barrels per day (mb/d) and crude oil supply growth for 2022 higher by 80kb/d to 574kb/d. The energy watchdog, however, revised its 2023 production outlook lower by 21kb/d to 12.31mb/d and 2023 growth lower by 121kb/d to 487kb/d. This in effect means that next year’s output will fail to surpass the record 12.315 million barrels set in 2019. EIA also predicted that Brent prices will average $95.33 per barrel, down from the current year’s average of $102.13. The new projections have elicited mixed reactions across the board, with Bloomberg saying, “The projection suggests the pace of US shale growth, one of the few sources of major new supply in recent year, is slowing despite oil prices hovering at around $90 a barrel, about double most domestic producers’ breakeven costs. If the trend continues, it would deprive the global market of additional barrels to help make up for OPEC+ production cuts and disruption to Russian supplies amid its invasion of Ukraine.”

Bloomberg has cited recent comments by ConocoPhillips (NYSE: COP) CEO Ryan Lance that rising costs as well as limited supplies of labor and equipment as some of the problems that have hamstrung efforts by U.S. shale producers to quickly ramp up production. However, Bloomberg notes that the biggest factor behind the slowdown is a change of the playbook by the majority of U.S. shale companies from focussing on growth and expansion to more capital discipline and returning more cash to shareholders.

Related: Why Russian Crude Will Keep Flowing To India Despite U.S. Pressure

These bearish projections won’t sit well with President Biden, who has repeatedly called for U.S. producers to boost production in a bid to lower fuel prices. However, they are definitely bullish for oil prices considering that OPEC+ is set to cut production by 2 million barrels per day beginning November and China has eased Covid-19 restrictions.

But commodity analysts at Standard Chartered have begged to disagree, arguing that U.S. crude supply and shale oil supply have both yet to peak.

StanChart has not provided any insights into how they arrived at this decidedly bullish projection for the U.S. crude production. 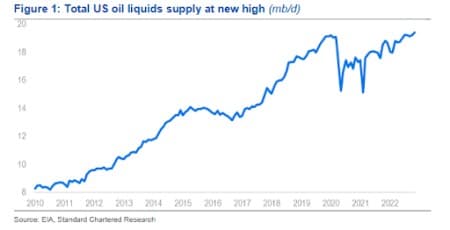 Current indications regarding U.S. crude supply are mixed. After stagnating for months, U.S. drilling and fracking activity has started climbing with current rig count of 779 a good 223 rigs higher than a year ago. However, EIA data shows that production per rig has fallen to 966 barrels per rig per day in November compared to 980 barrels per rig in September.

Further, the large decline in drilled but uncompleted wells (DUCs) from 8,900 at its peak in 2019 to 4,333 currently shows that many shale companies have so far been reluctant to go back to their trigger-happy drilling day and are mainly falling back on their DUC stockpiles. More worryingly, oil exploration has really plummeted not only in the U.S. but across the globe. A recent report by Rystad Energy has revealed that a mere 44 oil and gas lease rounds will take place globally this year, the fewest since the year 2000 and a far cry from a record 105 rounds in 2019. According to the Norwegian energy punter, only two new blocks had been licensed for drilling in the U.S. as of the end of August this year with no new offers for oil and gas leases originating with the Biden administration itself. Indeed, the handful of auctions that have gone ahead under Biden or bled into his presidency were decided upon during the presidency of Donald Trump. Meanwhile, Rystad has revealed that Brazil, Norway and India are the world leaders in terms of new licenses.

Such low levels of exploratory interest are not sustainable and might come back to bite the world before long. A year ago, Rystad Energy warned that Big Oil could see its proven reserves run out in less than 15 years, thanks to produced volumes not being fully replaced with new discoveries.

According to Rystad, proven oil and gas reserves by the so-called Big Oil  companies namely ExxonMobil (NYSE: XOM), BP Plc. (NYSE: BP), Shell Plc (NYSE: SHEL), Chevron (NYSE: CVX) are rapidly falling, as produced volumes are not being fully replaced with new discoveries. Only TotalEnergies ( NYSE: TTE), and Eni S.p.A (NYSE: E) have avoided reductions in proven reserves over the past decade. ExxonMobil, whose proven reserves shrank by 7 billion boe in 2020, or 30%, from 2019 levels, was the worst hit after major reductions in Canadian oil sands and US shale gas properties. Shell, meanwhile, saw its proven reserves fall by 20% to 9 billion boe last year; Chevron lost 2 billion boe of proven reserves due to impairment charges while BP lost 1 boe.

Global oil and gas companies cut their capex by a staggering 34% in 2020, in response to shrinking demand and investors growing wary of persistently poor returns by the sector. Capex is only set to rise ~12% in the current year. It might be years before oil executives (and investors) are confident enough to return to pre-pandemic drilling levels.