Sustained high commodity prices and increasing oil and gas supply are set to push upstream sector payments to governments to an all-time high of $2.5 trillion this year, smashing the previous record of $2.1 trillion set in 2011, Rystad Energy research shows. Saudi Arabia is, unsurprisingly, set to top the table in terms of total cash flow to government from the sector this year, followed by the US and Iraq, with the top 10 list dominated by Middle Eastern producers. Government take varies considerably between nations, however, with Norway and Iraq seeing an average take per produced barrel of oil equivalent (boe) of around $100, while for the likes of the US and Canada the figure is below $20 per boe.

Total tax income in 2020 was just above $600 billion as low oil and gas prices and production cuts due to the outbreak of the Covid-19 pandemic early in that year sent such income to one of the lowest levels this century. Total tax income increased last year to $1.4 trillion, with higher commodity prices being the main driver behind the rise.

“The leap to a record high in revenues is being driven by a combination of high oil and gas prices and lower costs. A year ago, it looked like the era of trillion-dollar revenues might have been behind us. Today it is clear that we are heading into a super cycle that will benefit petrostates. These record revenues present an unparalleled opportunity to diversify economies,” says Espen Erlingsen, Head of Upstream Research at Rystad Energy 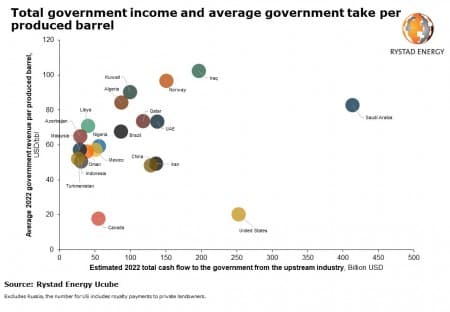 Saudi Arabia will be the largest beneficiary in absolute terms and is expected to receive just above $400 billion from its cornerstone industry this year, an increase of almost $250 billion from 2021. The US, when including royalties paid to private landowners, takes second spot with around $250 billion paid to government, an increase of $100 billion compared to 2021. Iraq follows with about $200 billion in total tax income, a doubling of its income compared to 2021.

Norway’s position in fourth comes despite being only the tenth-largest oil and gas producer globally and the government will receive revenues of around $150 billion in total tax income. This is due to European gas prices, low levels of cost and large government ownership driving this achievement.

One way to measure the tax pressure for the different countries is to look at the average government take per produced barrel. This measures how much money is flowing to a particular government per produced barrel, here including both oil and gas. There are several drivers for this metric, including costs levels, oil price discounts, gas prices, tax rates and the share of national oil companies (NOC) in the different countries.

While oil and gas revenues are at an all-time high, the amount of cash per citizen can vary greatly. A per capita measurement shows that Nigeria will receive around $300 per capita. Indonesia and China will jointly receive the lowest incomes per capita at around $100. At the other end of the scale, Qatar, Norway and Kuwait will receive a whopping $40,900, $28,000 and $23,200, respectively, per citizen. 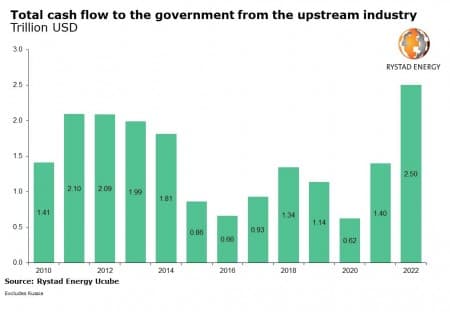