How do things stand for the oil & gas industry in the wake of COP27? 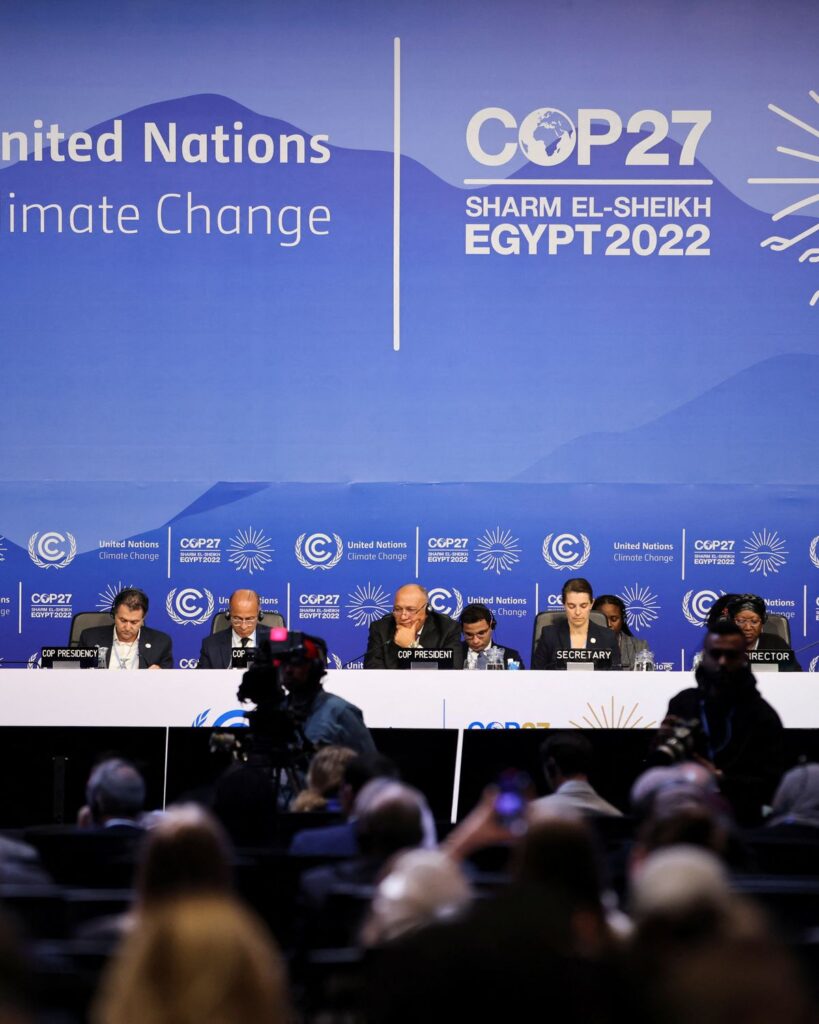 In the aftermath of the 2022 United Nations Climate Change Conference, or COP27, which closed over the weekend following two weeks of intense negotiations, many argue that very little progress was made on the phasing out of fossil fuels.

While this could be seen as good news for the oil and gas lobby, climate activities believe that the main driver of the climate crisis has not been addressed. However, the final outcome in the form of an agreement that established a funding mechanism to compensate vulnerable nations for loss and damage from climate-induced disasters is still seen as a step in the right direction.

Amid heightened concerns about global energy security, the world’s eyes were on Sharm El-Sheikh over the past two weeks, as COP27 brought together heads of state and delegates – including ministers, scientists, policy-makers, members of civil society, IGOs, activists and youth – in a bid to push climate action to the forefront, seeking to deliver on the Paris Agreement.

After missing the Friday night deadline, COP27 ended on Sunday, 20 November 2022, once negotiators reached conclusions on “the most difficult items of the agenda,” including a loss and damage facility with a commitment to set up a financial support structure for the most vulnerable by the next COP in 2023.

In addition, the agenda covered the post-2025 finance goal and the so-called mitigation work programme. This is expected to reduce emissions faster, catalyze impactful action, and secure assurances from key countries that they will take “immediate action” to keep on the path towards 1.5°C.

The decision to establish a loss and damage fund came after developing countries made strong and repeated appeals for such a fund to compensate the countries that are the most vulnerable to climate disasters, yet who have contributed little to the climate crisis.

While this agreement is seen as “a welcome step in the right direction,” many believe that there appeared to be “little forward movement on other key issues,” particularly on the phasing out of fossil fuels, and “tightened language” on the need to limit global warming to 1.5 degrees Celsius.

In line with this, warnings from environmental activities and other organisations point out that new language, including “low emissions” energy alongside renewables as the energy sources of the future, is “a significant loophole.” It is said that the undefined term could be used to justify new fossil fuel development against the clear guidance of the UN Intergovernmental Panel on Climate Change (IPCC) and the International Energy Agency (IEA).

António Guterres, UN Secretary-General, highlighted that work is required to “drastically reduce emissions now – and this is an issue this COP did not address.” Guterres also underscored that the world needs to end its addiction to fossil fuels by investing “massively” in renewables while emphasising the need to make good on the long-delayed promise of $100 billion a year in climate finance for developing countries, establishing clarity and a credible roadmap to double adaptation funds.

Furthermore, the UN chief renewed his call for just energy transition partnerships to accelerate the phasing out of coal and scaling up renewables, reiterating the call he made during his opening speech at COP27 for a climate solidarity pact.

“A pact in which all countries make an extra effort to reduce emissions this decade in line with the 1.5-degree goal.  And a pact to mobilise – together with international financial institutions and the private sector – financial and technical support for large emerging economies to accelerate their renewable energy transition,” outlined Guterres, adding that this is essential to keep the 1.5-degree limit within reach.

Opposition to the cover decision text came from multiple sides, as it did not commit to “the swift, just, and equitable phase-out of fossil fuels,” despite calls from civil society organisations and governments worldwide, including India, Tuvalu, the UK, Norway, Denmark, Spain, and the EU, according to 350.org, which claims that people across the world are depending on governments to commit to phasing out oil, gas and coal in order to uphold the Paris Agreement.

In line with this, Seve Paeniu, Tuvalu’s Minister of Finance, urged that “stronger language” is needed in the text for the cover decision “on a ban for new fossil fuel extraction and production” and underlined that “the phase-out of all fossil fuels must be included in the cover decision for this COP.” Tuvalu’s stance does not come as a surprise as the country recently became the second nation-state to call for the development of a Fossil Fuel Non-Proliferation Treaty, backing Vanuatu, which issued the same call in September 2022.

In a statement on Sunday, the Fossil Fuel Non-Proliferation Treaty Initiative also pointed out that a year ago at COP26, pressure from the climate movement led to the first-ever mention of fossil fuels in the text of a UN climate negotiation – “even if the text was full of loopholes so big you could drive a drill rig through.”

Despite the attempts to improve on the Glasgow outcome from COP26 and the Stockholm+50 agreement in June 2022 that all fossil fuels must be phased out, governments “simply copy and pasted old language that didn’t even mention oil and gas and was replete with ‘weasel words’ that allow for greenwashing and reliance on as yet unproven technologies such as carbon capture and storage (CCS).”

Furthermore, the Fossil Fuel Non-Proliferation Treaty Initiative highlighted that the final decision still calls for a “phasedown of unabated coal power,” instead of accepting calls made by many countries and civil society who called for an “equitable phase out of fossil fuels.”

However, the initiative considers the new fund, which was agreed to help developing countries cope with the losses and damages suffered due to climate breakdown, as “absolutely vital.” It is believed that this will become even more important because “the more fossil fuels that are burnt, the greater the losses and damages will be. The fight now becomes how to resource the fund – many suggest that polluting fossil fuel companies should be on the hook through a windfall profits tax.”

Another positive outcome from COP27 is considered to be a launch of a new work programme that includes an annual meeting of ministers to “discuss the just transition.” Additionally, the Fossil Fuel Non-Proliferation Treaty Initiative claims that diplomatic support for the end of the fossil fuel era has risen as 80 countries made statements calling for “a transition away from all fossil fuels. While this was blocked from being included in the final text, it is a huge step forward.”

Greenpeace also welcomed the agreement to establish a loss and damage finance fund and Yeb Saño, Executive Director, Greenpeace Southeast Asia, stated: “Today’s victory for people power on loss and damage must be translated into renewed action to expose climate action blockers, push for bolder policies to end our dependence on fossil fuels, boost renewables, and support a just transition. Only then can greater strides towards climate justice be taken.”

Meanwhile, Stockholm Environment Institute stated on Monday that COP27 in Sharm el-Sheikh failed to advance climate action by being “weak” on fossil fuels and ended with only one achievement. This refers to the decision to establish a designated fund to provide financial support to victims of climate impacts.

Michael Lazarus, centre director of SEI US and an author of the Production Gap Report, said: “It is very unfortunate that they fell short and ended up merely repeating the call for the phasedown of ‘unabated coal power’ and phase-out of ‘inefficient’ subsidies that already stood at the end of last year’s COP26. The science is clear: global oil and gas as well as coal use and production must start declining immediately and steeply to be consistent with limiting long-term warming to 1.5°C.

“As the Production Gap Report has shown, the world’s governments plan to produce more than double the amount of fossil fuels in 2030 than would be consistent with limiting warming to 1.5°C. Policy makers to must take immediate steps to align their energy policies with climate ambitions, and wind down the production and use of all fossil fuels.”

As the COP27 deal referenced the need to increase “low emission and renewable energy,” Stockholm Environment Institute elaborated that this phrase could mean expanding solar, wind or nuclear power, but “it could also mean expanding rather than winding down fossil gas, a source of both carbon dioxide and methane emissions.”

Among the highlights of COP27, the UN listed the launch of the first report of the High-Level Expert Group on the Net-Zero Emissions Commitments of Non-State Entities, which slammed greenwashing and weak net-zero pledges. This report also provided “a roadmap to bring integrity to net-zero commitments by industry, financial institutions, cities and regions and to support a global, equitable transition to a sustainable future.”

During COP27, the UN announced the Executive Action Plan for the Early Warnings for All initiative, which calls for initial new targeted investments of $3.1 billion between 2023 and 2027, equivalent to a cost of just 50 cents per person per year.

Meanwhile, Al Gore, a former U.S. Vice-President and climate activist, with the support of the UN Secretary-General, presented a new independent inventory of greenhouse gas emissions created by the Climate TRACE Coalition, combining satellite data and artificial intelligence to show the facility-level emissions of over 70,000 sites around the world, including companies in China, the United States and India. This will allow leaders to identify the location and scope of carbon and methane emissions being released into the atmosphere.

Another highlight of this conference was a so-called master plan to accelerate the decarbonisation of five major sectors – power, road transport, steel, hydrogen, and agriculture – presented by the COP27 Egyptian Presidency.

In his closing remarks, Simon Stiell, UNFCC Executive Secretary, remarked: “We’ve determined a way forward on a decade-long conversation on funding for loss and damage,” and in the text adopted on Sunday morning, “we have been given reassurances that there is no room for backsliding. It gives the key political signals that indicate the phase-down of all fossil fuels is happening.”

In a separate statement, the International Renewable Energy Agency (IRENA) outlined that the current speed and scale of the energy transition are not on track to meet the Paris Agreement goals while emphasizing that renewables are the backbone of this transition.