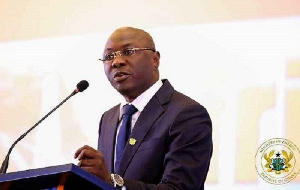 He said major oil companies that had played key role in the oil and gas exploration on the continent were being impressed upon by their investors to reduce investment in the sector.

Dr Adam said this when he addressed the Ghana Investment Forum on the sidelines of the 2022 Offshore Technology Conference, at Houston Texas, in the United States of America, monitored by the Ghana News Agency.

The Deputy Minister stated that although there had been some 4.6 trillion dollars of investment in the sector since the signing of the Paris Agreement, Africa received only 132 million dollars.

He observed that the low investment was detrimental to the development of the continent,explaining that investment in renewable energy had been also low.

“The energy transition will be disruptive to Africa’s economy. However, it will not influence Africa to abandoned its hydrocarbon. We will harness the resources to develop,” he said.

He said African nations had challenges and needed to be given the opportunity to undertake its energy transition in its pace.

Dr Adam said Ghana backed calls by other Africa countries to establish an African energy bank to boost investments in the oil and gas sector to generate the needed revenue for development.

He said the energy bank was important due a decision by developed nations to phase out funding for hydrocarbon-directed investments in a move for renewable energy.

Dr Adam reiterated the Government of Ghana’s commitment towards establishing a petroleum hub to meet the demands of the West African sub-region and the entire continent and further develop Ghana’s petroleum downstream sub-sector.

He explained that the hub would accommodate a refinery to process crude oil into various petroleum products and manufacturing plants for the processing of fertiliser from the by-products of oil.

The move by the government forms part of a major initiative to create more jobs in the oil and gas sector and provide investment opportunities for interested companies within and outside Ghana.

The hub, which is expected to cover an area of about 20,000 square kilometres, will be developed using the free zone concept.

Dr Adam said the inter-African oil and gas trade was about 5.2 percent and that the development of the hub and coming of African Continental Free trade Area would help address the challenge.