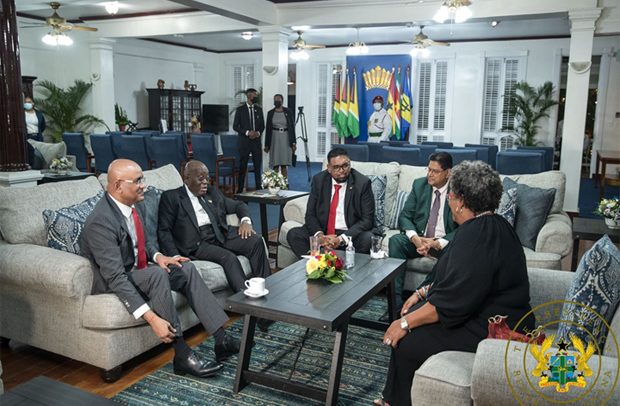 President Akufo-Addo and the Presidents of Guyana, Suriname and Prime Minister of Barbados in a chat

PRESIDENT AKUFO-Addo has called on countries with substantial hydrocarbon deposits to come up with processes that will enable them convert such into production as quickly as possible.

According to him, value addition to such resources was an essential condition for developing countries such as Ghana and Guyana to transition to the status of developed countries, adding “the effective management of these resources will determine whether we make it or not.”

The President stated this when he delivered a keynote address Tuesday at the maiden International Energy Conference and Expo in Georgetown, Guyana.

He said the two countries must exploit these oil and gas reserves to tackle poverty and energy shortages, while they take steps to mitigate the damage to the environment as the world seeks to transition to renewable forms of energy.

The energy conference, attended by the President of Guyana, President of Suriname, Prime Minister of Barbados, and the CEO of Exxonmobil, amongst others, touted Ghana as a model case in Africa in the management of oil and gas resources.

The President said the discovery of oil resources in Ghana in 2007 offered a unique, historic opportunity for the country to develop the Ghanaian economy, and finance priority domestic investments which are crucial for diversified growth.

“By the grace of God, many more discoveries have since followed, and Ghana’s ability to use these resources for the development of the economy and enhancing the welfare of citizens remains robust,” he asserted.

He indicated that a major challenge confronting Ghana is how to develop the oil and gas industry with optimal local content and participation, enhanced national development, and create jobs.

“It is important to note that Ghana’s local content law is not about nationalisation of the petroleum sector or a protectionist initiative, but a vehicle for partnering investors to develop domestic capacity that will bring mutual benefits to the investors and the citizens of the country, who own the resources, and, thereby, ensure social harmony and cohesion,” he intimated.