As the global energy crisis deepens and countries scramble to secure reliable energy sources, investments in new liquified natural gas (LNG) infrastructure are set to surge, reaching $42 billion annually in 2024, Rystad Energy research shows. These greenfield investments are 200 times the amount in 2020 when just $2 billion was invested in LNG developments due to the pandemic. However, project approvals after 2024 are forecast to fall off a cliff as governments transition away from fossil fuels and accelerate investments in low-carbon energy infrastructure. The new LNG projects are driven mainly by a short-term increase in natural gas demand in Europe and Asia due to Russia’s war in Ukraine and ensuing sanctions and restrictions placed on Russian gas exports. Spending on greenfield LNG projects this year and next will stay relatively flat, with $28 billion approved in 2021 and $27 billion in 2022. Investments sanctioned in 2023 will show a modest increase, nearing $32 billion, before peaking at $42 billion in 2024. After this date, investments will decline and drop back near 2020 levels to reach $2.3 billion in 2029. Despite an expected jump in 2030 when project announcements are forecast to total nearly $20 billion, investment in greenfield LNG is unlikely to ever return to 2024 levels as countries scale up investments in low-carbon technologies.

Natural gas is a core component of many countries’ power generation systems and, although there is a determination to reduce fossil fuel dependency and transition to a low-carbon power mix, demand for LNG is set to grow over the short term. Global gas demand is expected to surge 12.5% between now and 2030, from about 4 trillion cubic meters (Tcm) to around 4.5 Tcm. Gas demand in the Americas will remain relatively flat up to 2030. In contrast, on the back of strong economic growth and pro-gas policies from governments, regional demand in Asia and the Pacific will soar, growing 30% from about 900 billion cubic meters (Bcm) to around 1.16 Tcm by 2030. The Americas – primarily the US – will account for 30% of cumulative gas demand by 2030, while Asia-Pacific will account for 25%.

Helped by this new infrastructure, total LNG supply is expected to almost double in the coming years, growing from around 380 million tonnes per annum (Mtpa) in 2021 to about 636 Mtpa in 2030, with several major LNG projects already underway or in the pipeline. LNG production is predicted to peak at 705 Mtpa in 2034.

“Recent price surges in natural gas markets worldwide have somewhat constrained gas demand, triggering a resurgence of coal-fired power generation in many countries. However, governments remain bullish on gas as an affordable, transition fuel for power in the coming years as demonstrated by the rapid growth in LNG infrastructure investments,” says Palzor Shenga, vice president of analysis with Rystad Energy. 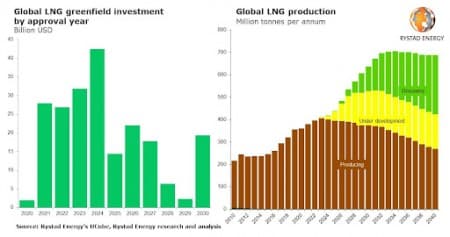 Where is all this LNG coming from?

The U.S. is set to solidify its place as a top LNG exporter as increased domestic supply and higher prices in Europe and Asia encourage operators to sell gas overseas. The $10 billion Golden Pass LNG project in Texas, a joint venture between QatarEnergy (70%) and ExxonMobil (30%), is expected to start production by 2024, adding export capabilities to the Sabine Pass LNG terminal totaling around 18 Mtpa. Venture Global’s Plaquemines LNG in Louisiana – a $13.2 billion development sanctioned earlier this year – is expected to produce about 24 Mtpa and start up in 2025. In a move that may become more common in the crowded market, Cheniere Energy signed a deal with Chinese state giant PetroChina to supply around 1.8 Mtpa of LNG from its Corpus Christi LNG facility, with deliveries from 2026 to 2050.

Elsewhere, Qatar, Mozambique and Russia are playing catch up. Qatar, already a major producer, aims to boost LNG export capacity to 126 Mtpa by 2027 from a current 77 Mtpa. International industry heavyweights ExxonMobil, Shell, TotalEnergies, Eni and ConocoPhillips have been chosen to join state-owned QatarEnergy in the North Field East expansion project, which is set to raise capacity to 110 Mtpa.

Russian volumes are primarily dependent on the successful completion of the Novatek-operated Arctic LNG 2 project, which is potentially in jeopardy as sanctions against Russia over the Ukraine conflict have led to delays in the commissioning of Train 2 and Train 3. Project partners TotalEnergies and JOGMEC have halted all financing related to the scheme in the Russia-Ukraine war, followed by the withdrawal of chemicals giant Linde as a contractor.

In Africa, Mozambique will see its first LNG production by the end of 2022 via the under-development, Eni-operated Area 4 (Coral South) LNG project. The project will provide around 150 million cubic feet per day (MMcfd) of gas to the domestic market.

Projects that have been approved or are currently being developed will recover about 300 Tcf of LNG, led by the US with approximately 97 Tcf, then Qatar with about 52 Tcf and Russia at 50 Tcf. These top three nations hold around 70% of the total sanctioned, yet-to-be-produced global LNG resource.

Source:LNG Investment To Peak In 2024 At $42 Billion | OilPrice.com