Heading into November 2022 with the firm knowledge that intra-OPEC+ cohesion has been restored to the fullest and the oil group has been given a new long-term ambition, pricing decisions for Middle Eastern cargoes loading next month faced an uncanny dilemma. A sizable supply cut would definitely merit a corresponding OSP hike, however, what to do with ubiquitous fears of a still-unseen recession coming our way? After all, the US Federal Reserve is getting increasingly worried about not seeing signs of inflation easing and by now is seen to reach a consensus target policy rate of 4.5% by March 2023. Likewise, China’s oft-mooted return from its lockdown frenzy has not been particularly stellar – the CCP summit in Beijing has demonstrated that the country’s political path forward is much more fleshed out than its economic one. 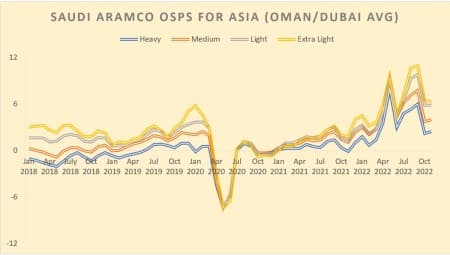 Looking at Dubai futures alone, the cash-to-futures Dubai spread increased by approximately 50 cents per barrel compared to the August 2022 average, so Saudi Aramco and its Middle Eastern peers were expected to hike formula prices. The real question was the extent of them, especially if the NOCs would consider the by-then negotiated OPEC+ decision and the overall gloom and doom in the commodity markets. Saudi Aramco went for a surprise with its Asian pricing, rolling over from October Arab Light OSPs, probably the most closely followed of them all, and keeping them at a premium of $5.85 per barrel to Oman/Dubai. The heavier grades, namely Arab Medium and Arab Heavy, were hiked only by 25 cents per barrel each, redeeming some of the losses witnessed last month. As the regional prices of medium sours suffered last month in Europe, Saudi Aramco went with a uniform decrease in both Northwest Europe and the Mediterranean, dropping Arab Light by $1.50 per barrel from October and the heavier grades by $1.80 per barrel month-on-month. 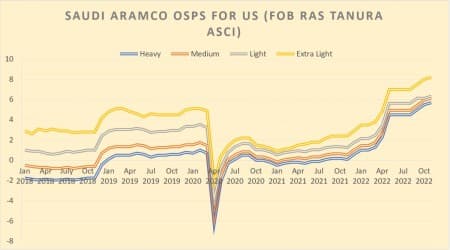 One of the most interesting geopolitical undercurrents in Saudi crude pricing has been the increasingly difficult relationship between Riyadh and Washington. Amidst several court cases directly involving the Saudi Arabian Crown Prince Mohammed bin Salman – most notably the one in the US District Court for Columbia where he is a defendant. That specific lawsuit has been creating all sorts of problems for the White House (the US Department of Justice has repeatedly asked the court to postpone the hearings, still unable to provide an opinion on the Crown Prince’s sovereign immunity). Amidst all this, Saudi Aramco continues to hike OSP-bound formula prices – they have not fallen for more than a year already – with Arab Light already at a $6.35 per barrel premium to ASCI. As things stand, already weak Saudi flows to the United States are bound to become even weaker. 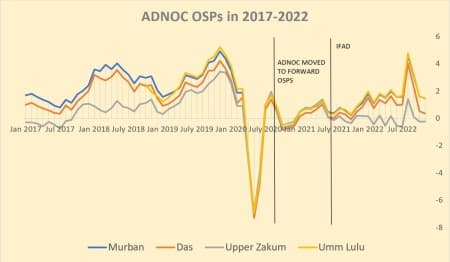 One of the rare oil and gas powerhouses that has been consciously reaping the benefits of elevated energy prices, the UAE knows full well what a cash cow it has in ADNOC. Amidst ubiquitous economic doom, the Emirates’ GDP is set to grow by 5.4% this year (and another 4.2% in 2023) and ADNOC’s rejuvenated divestment program might add a billion or two to that tally. However, with ADNOC moving to exchange-set formula prices, the insecurities of the market found their way into November 2022 OSPs as well. Based on the past month’s IFAD monthly average, the flat price for Murban has been calculated at $92.45 per barrel, an almost $6 per barrel drop from October. What is more, the Murban-Dubai spread continued to shrink for the third straight month, falling to a third of its August $4.6 per barrel peak, implying that profitability of light sweet grades in the Asian market leaves much to be desired. On the other hand, ADNOC’s medium sour Upper Zakum further narrowed its discount to Murban, the differential in November will stand at -$1.70 per barrel. 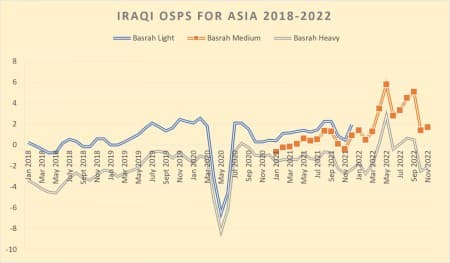 Following months of disarray and friction, Iraq has made a giant leap this past month in creating some form of stability and governance in the country by aligning on a new president as well as designing a new prime minister – former minister of water resources Latif Rashid will become the former, whilst the latter post will be handed to Mohammed Shia al-Sudani, the former human rights minister of the country. Should both be voted into office, we might see a flurry of new activity in Iraq from mid-November onwards as many high-impact projects have effectively stalled this year for lack of regulatory approvals, ministerial decisions etc., prime amongst them is the expansion of Basrah’s export capacity. At last, it seems that Baghdad will have an opportunity to spend the windfall revenue that it has been generating in 2022. When it comes to November 2022 OSPs, Iraqi pricing into Asia saw more pronounced changes than Saudi Aramco’s. 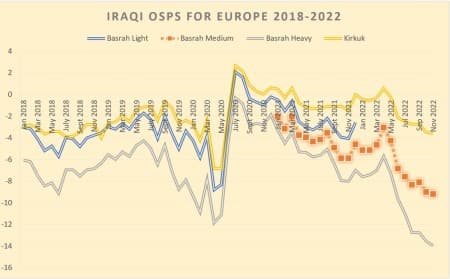 Sticking to the concept that the heavier the grade the bigger month-on-month increase, Basrah Heavy is up 40 cents per barrel (to a -$2.1 per barrel discount to the Oman/Dubai average) whilst Basrah Medium will be at a $1.70 per barrel premium to O/D, up 30 cents per barrel from October. With Europe, the Iraqi state oil marketer SOMO opted for moderate decreases of -$0.1/-$0.4 per barrel. In stark contrast to generally deep-conversion-friendly Asia, however, the heavy sour Basrah Heavy was cut the most and its -$13.95 per barrel discount to Dated Brent in November is the cheapest that the Iraqi grade has been since its introduction to formula pricing back in 2015. Even accounting for flattening backwardation in September, it would be safe to assume that Iraq’s relatively buyer-friendly pricing is a signal for European refiners to consider Iraqi options for 2023, once the EU’s Russia sanctions come into effect. 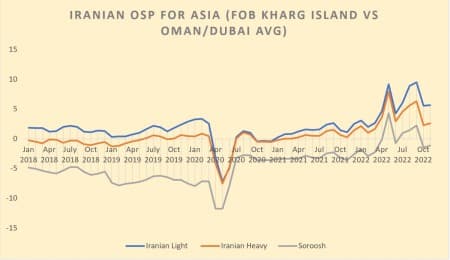 Learning from the formula prices of Saudi Aramco and SOMO (both of which have published their OSPs before NIOC), Iran’s national oil company decided to stick to a straightforward policy line. For Asia, it hiked its flagship Iranian Light by 10 cents per barrel (to a $5.65 per barrel premium over Oman/Dubai). This is slightly more than the Saudi roll-over of Arab Light but also less than Basrah Medium – whilst other grades like Iranian Heavy or Soroosh were increased by 30 cents per barrel. In effect, Iranian barrels are not sold based on OSPs but negotiated on a spot basis, making NIOC still a somewhat academic exercise.

The odds of seeing a JCPOA breakthrough are becoming slimmer by the day as the EU and the United States consider slapping further sanctions on Iran for its provision of military drones to Russia. In addition, the wave of civil unrest that has swept across Iran recently following the death of Mahsa Amini, disrupting amongst others also operations at the refineries in Abadan and Assaluyeh, carries the potential of driving yet another wedge between the two sides. There has been no apparent disruption to loading operations in Iranian ports, with exports still hovering around the 800-900,000 b/d mark. 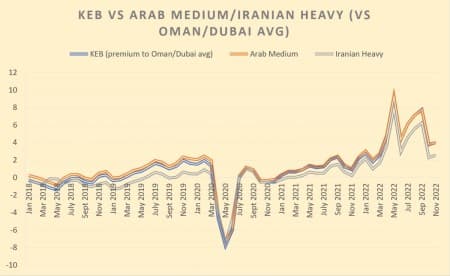 The Middle East has never been short of war and conflict, however Kuwait’s woes throughout 2022 represent a unique picture, a country where democracy has permeated decision-making to the extent that the parliament can block the work of the government. The swearing in of a new government mid-October could end a political stalemate hindering Kuwait for some four months already, however its success is far from being guaranteed. Yet is much more than just politics – the country’s main new oil project, the 615,000 b/d Al-Zour Refinery is hopelessly overdue, whilst its two operational refineries have seen a fire and a power cut this month. With Kuwait being overwhelmingly reliant on the Asian market for its exports, its pricing decisions have little bearing on what is going on in Europe or the Americas, however its Asia-bound November OSPs turned out to be toeing the line set by Saudi Aramco. Kuwait Export Crude to Asia was hiked by 20 cents per barrel to a $4.00 per barrel premium vs the Oman/Dubai average, establishing absolute parity with its Saudi peer Arab Medium.