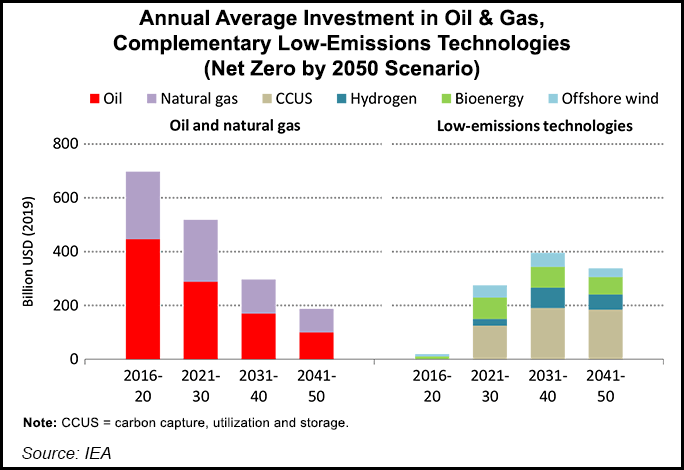 No more investments in new oil and gas fields should be sanctioned if the world is to have a shot at achieving net zero greenhouse gas (GHG) emissions by 2050, the International Energy Agency (IEA) said Tuesday.

The world’s oil and gas needs in a net zero world can be met by projects greenlit as of 2021, the global energy watchdog concluded in a report titled, Net Zero by 2050: A Roadmap for the Global Energy Sector.

The report sets out more than 400 milestones to guide emissions to net zero by 2050 and keep the human-induced global temperature rise under 1.5 degrees Celsius.

[Climate Check: Tune into NGI’s Hub & Flow podcast about President Biden’s climate commitments and how that might affect the U.S. natural gas industry.]

“These include, from today, no investment in new fossil fuel supply projects, and no further final investment decisions for new unabated coal plants,” researchers said. “By 2035, there are no sales of new internal combustion engine passenger cars, and by 2040, the global electricity sector has already reached net zero emissions.”

IEA modeling shows that under the net zero scenario, fossil fuels fall from almost four-fifths of total energy supply today to slightly over one-fifth by 2050.

Almost 90% of electricity generation would come from renewables, with nuclear power accounting for most of the remainder, researchers found. Wind and solar alone would combine to supply almost 70% of generation, they said.

“Fossil fuels that remain are used in goods where the carbon is embodied in the product such as plastics, facilities fitted with carbon capture, and in sectors where low-emissions technology options are scarce,” the IEA team said.

Firms such as Wood Mackenzie have forecast that natural gas demand will stay relatively resilient even in a net zero world, boosting prices, while oil demand is seen falling off more sharply.

The IEA forecast sees upstream oil and gas investment averaging around $350 billion annually from 2021 to 2030, then falling to around $170 billion/year after that.

Actions to reduce the emissions intensity of existing oil and gas operations, meanwhile, would include the end of all natural gas flaring; the use of carbon capture, utilization and storage (CCUS) with centralized sources of emissions; and “significant electrification of upstream operations (often making use of off-grid renewable energy sources),” researchers said.

They added, “The oil and gas industry could play a key role in helping to develop at scale a number of clean energy technologies such as CCUS, low-carbon hydrogen, biofuels and offshore wind.”

Once fields under development as of 2021 start production, then all upstream investment is spent on maintaining output at existing fields, researchers said.

In the net zero scenario, fossil fuel prices “are increasingly set by the operating costs of the marginal project required to meet demand, and this results in significantly lower fossil fuel prices than in recent years,” researchers said.

The report is meant to guide negotiations at the upcoming 26th Conference of the Parties (COP26) of the United Nations Climate Change Framework Convention in Glasgow this November. President Biden recently announced the strengthening of U.S. climate commitments ahead of the gathering.

“New energy security challenges will emerge on the way to net zero by 2050 while longstanding ones will remain, even as the role of oil and gas diminishes,” IEA said, adding, “The contraction of oil and gas production will have far-reaching implications for all the countries and companies that produce these fuels.

“No new oil and natural gas fields are needed in the net zero pathway, and supplies become increasingly concentrated in a small number of low-cost producers.”

Under the net zero scenario, IEA models show the Organization of the Petroleum Exporting Countries’ share of global oil supply grows from around 37% in recent years to 52% in 2050, “a level higher than at any point in the history of oil markets.”

Tax revenue from oil and gas retail sales would fall by about 40% between 2020 and 2030 under the net zero scenario, researchers found, requiring long-term fiscal planning and budget reforms.