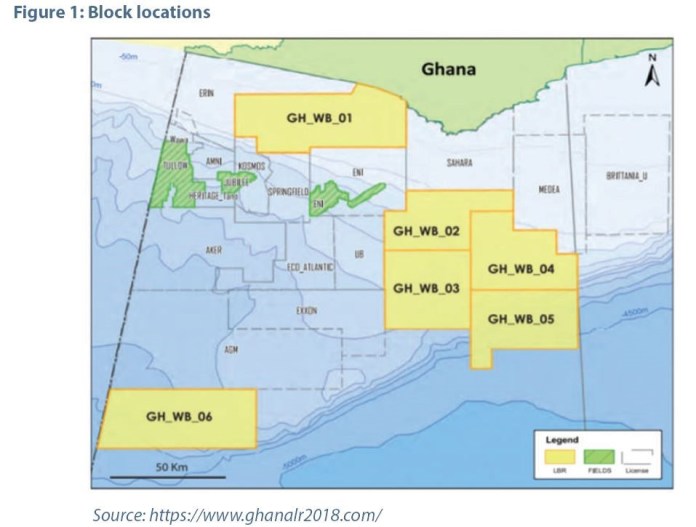 Following two years of negotiations of the agreement on the oil blocks located in the Western Basin of the country, the Director of Petroleum at the Energy Ministry, Benjamin Kwame Asante has revealed that the final agreement of Ghana’s first oil bid and licensing round will be laid before parliament before the close of the year.

Per the government’s official timeline, the negotiation with winning companies began on July 3, 2019, and were expected to be completed on August 30, 2019. First Exploration and Petroleum Development Company in partnership with Elandel Energy Limited as its local partner, won the bid for Block 2.

ENI Ghana Exploration and Production Limited, and Vitol Upstream Tano Limited in partnership with their local partner, Woodfield Upstream Limited, were selected as the winners for Block 3.

Speaking at a roundtable discussion on Upstream Petroleum Licensing and Contracting in Ghana, Mr. Asante said, “We are meeting the parties for the last time on the negotiations from November 30 to December 2, 2021″.

By this time,we would have a clear time direction as to when would conclude this negotiation. We are hoping that we can take it to parliament before they rise this year, as we have agreed on all the key terms of the agreement.

We have spent too much time trying to get things done but now we have come to a point where if we resume negotiations (this week) we can quickly conclude this before parliament finally rise this year, for ratification; then it can become effective for them to do their work.”

According to him, it has taken a longer time to conclude due to delays; key among which is the coronavirus pandemic, compounded as well by the uncertainties among investors during the 2020 elections.

The first oil bid and licensing round was launched in October 2018, where six blocks were made available for the licensing round; three blocks to be awarded through an open and competitive bidding process, two through direct negotiations and one to be solely operated by Ghana National Petroleum Corporation (GNPC), the national oil company.

Bid and licensing rounds are now a global norm for resource-rich countries in selecting investors for upstream petroleum activities. Ghana’s first oil and gas licensing and bidding round was to “ensure transparency and fairness in the prudent and efficient management of petroleum resources and to enable the government to accelerate upstream activities so as to increase reserves and production of petroleum resources, as well as to achieve significant participation interest.”

The process had 16 companies express interest and submitted 60 applications for the blocks on offer, of which 43 applications were for competitive bidding (Blocks 2, 3 and 4) and 15 were also for direct negotiations (Blocks 5 and 6).