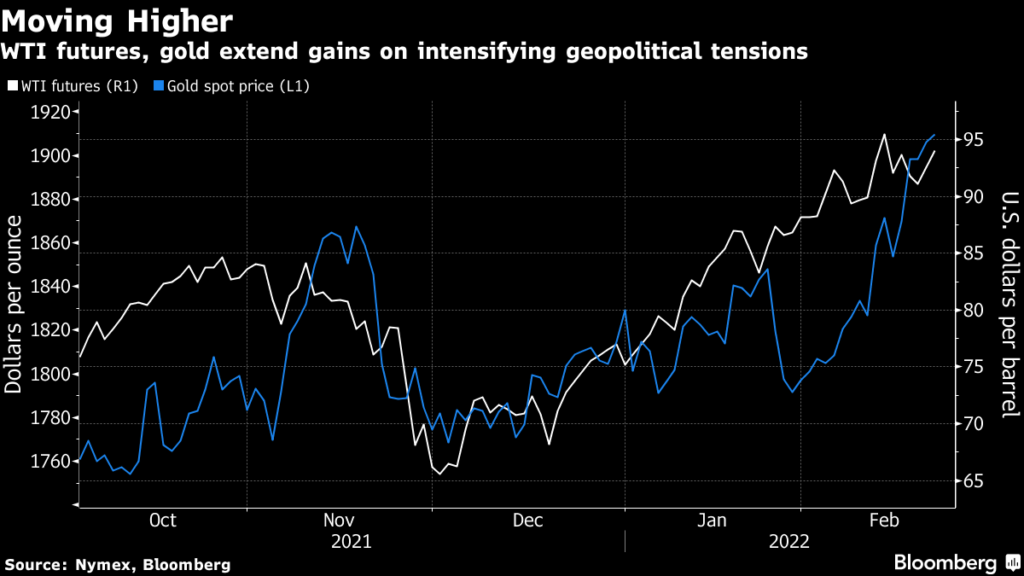 Oil and gold led a broad rally in commodities after Russian President Vladimir Putin announced that he’s recognizing two self-proclaimed separatist republics in eastern Ukraine and plans to send “peacekeeping forces” to the region in a dramatic escalation of the conflict.

West Texas Intermediate crude climbed about 3% from Friday, after not closing Monday due to a U.S. holiday, while gold touched an eight-month high. There were no details on how many Russian troops might go in, or when. Moscow has previously accused Ukraine of having a significant deployment of its own soldiers on the line of contact with the separatists in Donetsk and Luhansk.

The intensifying standoff — and the response from the U.S. and Europe — has the potential to roil raw materials markets. Russia is a major producer of oil, gas, aluminum and wheat, which Ukraine also grows. Gas markets are particularly on edge due to concerns over Europe’s reliance on fuel from Russia, about a third of which typically flows through Ukrainian transit pipelines.

The tensions come on top of a blistering rally in oil that’s been driven by output not being able to keep up with steadily rising demand and shrinking global inventories. Brent’s prompt timespread was in its deepest backwardation in almost a decade, an indication of how tight the market is becoming. Meanwhile, hopes of additional barrels from Iran hang in the balance as nuclear talks drag on.

“The oil market will continue to be on a knife’s edge over the next few months,” Sri Paravaikkarasu, Asia oil lead at FGE, said in a Bloomberg TV interview. “We could see prices surpass the $100-a-barrel mark very quickly and it even has an upside of $10 a barrel if we start seeing most sanctions being placed on Russian oil exports.”

The White House plans to announce new sanctions Tuesday in response to Russian actions on Ukraine, according to a Biden administration official. The U.S. is moving all State Department personnel and its embassy out of Ukraine and into Poland citing security reasons.

Gold has benefited from its role as a haven in times of geopolitical turmoil, as risks are “outweighing worries about the Fed tightening”, said Margaret Yang, a strategist at DailyFX. Meanwhile, cryptocurrencies tumbled, undermining the argument that they can fulfill a similar role.

Aluminum surged to the highest intraday level in more than 13 years, as the Ukraine tensions added to supply risks in a market already grappling with production pressures and growing demand. Prices rose as much as 1.9% to $3,342 a ton on the London Metal Exchange, and are closing in on an all-time record. Nickel surged as much as 1.4% to $24,700, the highest since 2011.

Chicago wheat futures jumped to a near one-month high as trading resumed after a U.S. holiday. Russia and Ukraine account for a quarter of global trade in the grain and a fifth of corn sales. There’s concern that an escalation could disrupt Black Sea shipments at a time when world food costs are already at a decade high.

Palm oil rocketed to a fresh record in Malaysia, hitting 5,799 ringgit ($1,386) a ton, on concern the global vegetable oils market would tighten further. Russia and Ukraine make up 80% of global sunflower oil exports.

Crude trading had been boosted Monday after Saudi Aramco said it sees signs that demand is rising, especially in Asia. OPEC+’s strategy of gradually raising oil production is enough to balance the market and the group and its partners will make their decision for April only after reviewing fresh data on supply and demand, Iraq’s Oil Minister said.

“Ukraine is going to dominate the volatility in short term market moves this week,” said Jeffrey Halley, a senior market analyst at Oanda Asia Pacific Pte. “If it continues to deteriorate then we can see Brent crude above $100 by the end of the week, if not before.”