These are rocky times for most investments. The S&P 500 and Nasdaq have each fallen for seven consecutive weeks while the Dow Jones Industrial Average has fared even worse, dropping for eight weeks straight, the longest losing streak for the index since the Great Depression, in 1932. The S&P 500 is now down 13.9% in the year-to-date while Nasdaq has dropped 23.1%. Meanwhile, a 10% contraction in global bonds only looks tame when compared to Bitcoin’s more than 30% decline in 2022.

But it has been a wonderful stretch for the dollar.

The U.S. Dollar Index, which pits the dollar against a basket of six global currencies, is hovering around 20-year highs. Since the beginning of the year, the dollar index has gained 8%; and in the last 12 months, it has risen 14%. The dollar index hit a two-decade high above 105 earlier this month and is currently trading less than 3% below those peaks. The dollar has performed even more spectacularly against single currencies: Against the Japanese yen, the dollar has appreciated more than 13% this year alone and gained 36.30% in 14-months against the sterling pound.

What’s interesting is that the very forces that are responsible for unsettling the stock and bond markets, including Fed rate increases, sky-high inflation, global sanctions on Russia and China’s lockdowns, have actually been buoying the dollar thanks to its well-established status as a global safe haven.

But a brawny dollar has failed to stop one commodity in particular: crude oil.

The oil price bull run has been taking little notice of the greenback’s advance, and has managed to snap crude’s historical inverse link to the dollar thus signaling it still has room to run based on current market fundamentals. 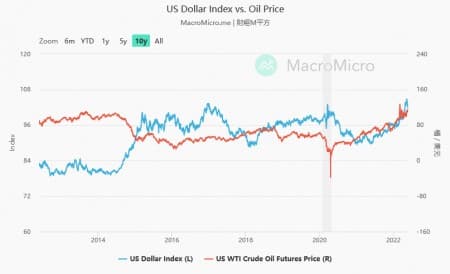 Oil prices and the dollar have been moving in the same direction higher since late March, and hit the highest positive correlation since May 2019.

The usual inverse correlation between oil and the dollar remained unchanged in 2020 and into early 2021 as demand for crude was undermined by the global pandemic. But many analysts now expect the positive link to persist given the tight oil market and broader risks to the global economy.

“Considering that spare capacity is low, there are likely larger supply disruptions ahead of us, and that oil demand will likely keep increasing, I would expect that oil will primarily be driven by its own fundamentals,” UBS analyst Giovanni Staunovo has said.

With oil currently trading around $115 a barrel, JPMorgan expects Brent prices to average $114 a barrel over the second quarter as whole, and even surge to over $120 a barrel at one point.

Another factor that has been contributing to the disconnect between a stronger dollar and oil prices is the fact that the current energy crisis has hit Europe the hardest: “Historically, energy crises and inflationary shocks were centered on the U.S. and hence dollar bearish,” MUFG’s head of emerging markets research, Ehsan Khoman has said. Europe– the region most heavily reliant on Russian energy imports–now happens to be the epicenter of the crisis, and is already grappling with deep energy trade deficits.

“As coal, gas and oil prices continue to remain elevated on supply scarcity, global growth ex-U.S. is suffering more than the U.S. economy, and by extension, the U.S. dollar is appreciating,” Khoman has added.

In other words, this is no longer only about the Fed.

The Fed’s hawkish stance including quantitative tightening fueled the initial stages of the dollar rally. But energy security concerns as well as major geopolitical upheavals in Europe are now fueling a second phase of not only the dollar rally but the oil price rally, too.