Oil prices continue to inch higher, with new reports that the White House is considering a ban on Russian crude oil. 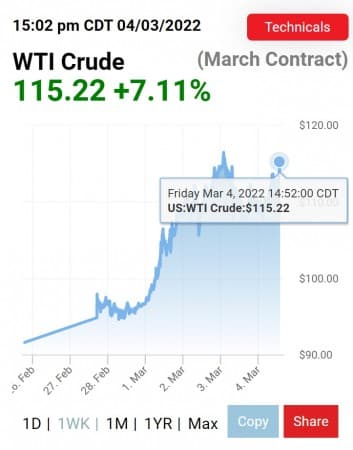 On Thursday, the White House had tersely dismissed the idea of banning Russian crude oil imports, pointing out that doing so could cause oil and gasoline prices to rise even more than they already had.

But other U.S. lawmakers have pushed for a full ban, including Speaker Nancy Pelosi (D-Calif.).

But by Friday, the White House’s take on banning Russian crude oil softened.

The Biden Administration is now said to be looking at what can be done immediately to make up for Russian crude oil, should they take that route, White House Council of Economic Advisors chair Cecilia Rouse said on Friday.

“We are considering a range of options, but what’s really essential is that we maintain a steady supply of global energy,” Rouse said at a press briefing.

Crude oil production in the United States has stagnated at 11.6 million bpd according to the latest EIA data, down from 13.1 million bpd prior to the pandemic.

A ban on Russian crude oil and crude products could send oil—and gasoline—prices even higher.