Oil Recovers After Volatile Start Of The Week

In this week’s newsletter, we will take a quick look at some of the critical figures and data in the energy markets this week.

We will then look at some of the key market movers early this week before providing you with the latest analysis of the top news events taking place in the global energy complex over the past few days. We hope you enjoy. 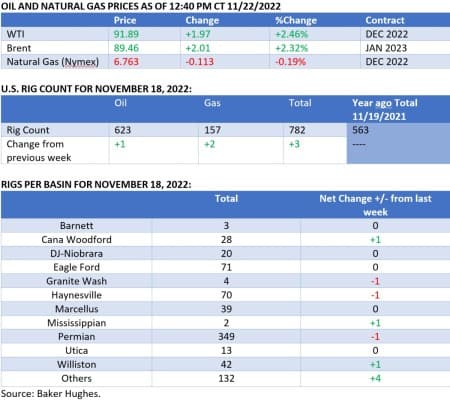 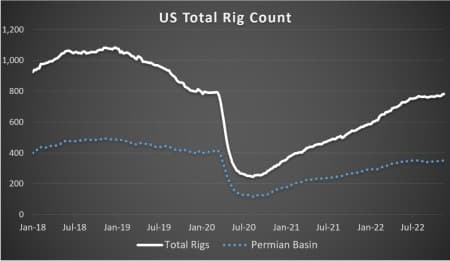 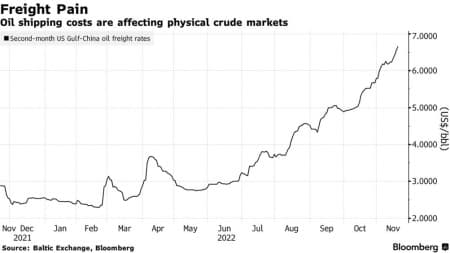 – Earnings on the US Gulf Coast-to-China shipping route have soared above $100,000 per day, equivalent to $7 per barrel, demonstrating the shrinking availability of crude tankers lately.

– The Russia-Ukraine war and subsequent sanctions have lengthened the average shipping voyage globally, so now charterers have less options and are forced to pay double the rate than over the summer months.
– Spot differentials for crudes across the Americas are tanking because of higher shipping costs – free-on-board prices for WTI plummeted a whopping $5 per barrel week-on-week to reflect the shipping.
– The shortage of tankers is taking place across all vessel categories, even VLCC freight costs from the Middle East into Asia Pacific have tripled year-on-year.

– Brazil’s president-elect Lula da Silva has reportedly started interviews to overhaul the top management of state oil company Petrobras (NYSE:PBR), setting it up for some turmoil.

The oil markets have been seesawing in a spectacular fashion this week. Still trying to overcome the pain of so many financials quitting the game last week, a WSJ report that argued OPEC+ was looking to increase its production target by 500,000 b/d come January 2023 has sent prices dovetailing, only to be halted by Saud Arabia, the UAE and Kuwait all denying the rumors and insisting that if anything, OPEC+ would be cutting further.

Will OPEC+ Increase Production? A Wall Street Journal report claiming OPEC+ is looking to hike collective output by 500,000 b/d next time it meets in early December, sending prices tumbling on Monday, however, Saudi Arabia and the UAE were quick to deny these rumors the same day.

Germany to Cap Prices in 2023. Even though the EU is still far from reaching an agreement on the gas price cap, the German government plans to limit gas and electricity prices in March 2023 retroactively from January, with the measure expected to be in place until the end of April 2024.

One Step Closer to Huge US Rail Strike. Workers at the largest rail union in the United States, SMART-TD, voted against a tentative White House-brokered contract deal struck two months ago, rapidly increasing the risks of a widespread rail strike ahead of the winter holiday season.

Freeport LNG Delays Squeeze the Market. The news of Freeport LNG pushing its restart into March 2023 following a damning report from federal pipeline safety, regulators have pushed U.S. natural gas prices to $6.7 per mmBtu, aggravated by forecasts for colder weather into December.

Germany’s LNG Terminal Costs Soar. The cost of purchasing and maintaining floating LNG terminals to help Germany survive this winter and diversify away from Russian gas has doubled to some $6.6 billion, with the first unit already completed at the North Sea port of Wilhelmshaven.

No Deal on UN Carbon Offset Markets. Whilst many expected COP27 to at least finalize a global framework for carbon offsetting credits, discussions around the creation of a unified UN-backed offset credit markets are likely to take several more years to bear fruit.

US Set to Tighten Bonding Rules for Drillers. A petition from a range of public interest groups is pushed the US government to condition the approval of federal drilling permit on operators posting the upfront cost to clean up wells, trying to deter cases when small producers file for bankruptcy to avoid cleanup costs.

Term LNG Contracts Are Sold Out. As reported by Bloomberg, global long-term LNG contracts before 2026 are all sold out, meaning that over the upcoming three years (until Qatar’s upgrades are commissioned) Europe and Asia will remain on collision course for remaining spot cargoes.

Italy Might Ask for Sanctions Waiver for Troubled Refinery. With the EU sanctions on Russian oil coming into effect in two weeks, Italy is considering several options to save its largest refinery, operated by Russia’s Lukoil in Sicily, one of them is to ask the EU for a temporary waiver.

India Becomes Key Market for Russian Fertilizer. Having become one of the largest buyers of Russian oil, India has also seen an influx of Russian fertilizers into the country, surging 371% year-on-year to 2.15 million tons in April-October 2022 and surpassing China as top exporter.

California’s Last Nuclear Plant Is Saved. The last operating nuclear plant in California, the 2.2 GW Diablo Canyon, was granted conditional funding of $1.1 billion to remain open beyond its initially assumed shutdown set for 2025, as part of the DOE’s $6 billion Civil Nuclear Credit pilot.