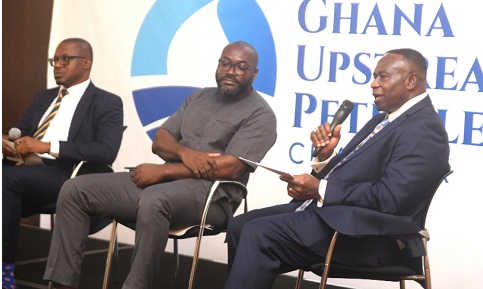 The Ghana Upstream Petroleum Chamber has called on the government to urgently put in strategic incentives to attract more investment in oil exploration in the country.

The call was part of recommendations made in the chamber’s 2022 Ghana Upstream Petroleum Industry report to improve the performance of the upstream petroleum sector.

The report also indicated the urgent need to incentivise exploration with attractive fiscal terms to grow and replace existing reserves, and also for government to consider giving some extensions to industry players due to the impact of Covid-19.

At the launch of the report in Accra yesterday[August 17, 2022], the Chief Executive Officer of the chamber, David Ampofo, noted that the country had only three operating fields — Jubilee, TEN and Sankofa Gye-Nyame — that had been in production for the last six to 12 years.

Mr Ampofo said the decline in Ghana’s oil production for the past two years as a result of COVID-19 and energy transition had been a source of worry to the chamber and the nation at large, and, therefore, the need to bring others on board.

He said the new additions would restore a vibrant industry and address the risk of the country ending up with stranded assets offshore.

The report, Mr Ampofo said, was the first of the planned annual reports that the chamber would be producing each year for the benefit of members, policy makers, oil and gas experts and non-experts.

“We are extremely pleased with this 2022 maiden report as it paints a clear picture of where things are and what we can do to continue to make progress,” he said.

The report also recommended an expedited appraisal of development projects and programmes that would resolve the current lag between discovery and production.

Government, it indicated, must agree with companies on definite timelines to bring discoveries to production, disclosing that since 2019, five exploratory wells had been drilled, with four successful discoveries pending appraisal.

The report further recommended the acceleration and completion of the Ghana Gas master plan to prioritise the utilisation of domestic gas in the country, urging government to also coordinate efforts of existing in-country investors on domestic gas optimisation.

Supporting the proposal for the government to provide attractive incentives to oil investors, other players in the industry expressed the view that oil deals took too much time to negotiate and ended up pushing potential investors into other jurisdictions.

“This is affecting the country, and although oil prices are going up, the country is not benefiting much because we are not producing much,” the local content and sustainability and external relations manager of ENI Ghana, Baluri Kassim Bukari, said.

The Senior Vice-President of Kosmos Energy and Chairman of the Ghana Upstream Petroleum Chamber, Joe Mensah, added: “We have resources that are stranded out there. Government should lower the bar to get more companies in. If not, the resources will be there, and it will have no benefit for the country,” he said.

The CEO of the Ghana National Petroleum Corporation, Opoku Ahweneeh Danquah, said there had been efforts to improve the environment for more oil firms to come to the country, but “we are making sure we get the companies with the capacity and the resources to award them contracts”.

He indicated that there had been some abrogation of contracts because the companies did not have the capacity and the resources to venture into the oil business.

The Operations Advisor of the chamber, Dr Kwame Boakye-Adjei, indicated that despite the challenges, the oil and gas sector continued to sustain jobs and businesses, particularly local concerns.

He disclosed that about 2,082 service companies were registered with the Petroleum Commission, while total employment in the industry stood at 5,280 as of 2021.

The upstream industry, which deals with the exploration and production of oil, he said, continued to contribute to the revenue basket of the country, with about $783.30 million accruing to the national budget through royalties, participation and taxes in 2021.

The country, he said, made savings of $1 billion from the utilisation of local gas in 2021, and also contributed GH¢11.63 billion to the Gross Domestic Product (GDP) that year.

Those gains, he noted, had called for the enhancement of distribution infrastructure leading to expansion works at the Atuabo gas plant.

A Deputy Minister of Energy, William Owuraku Aidoo, said Ghana had been well on the path of the energy transition, and that the industry continued to have huge potentials in spite of the transition.

The government, he assured, would continue to do its best to attract foreign investments into the country by providing flexible incentive structure, knowing the times the nation was in.