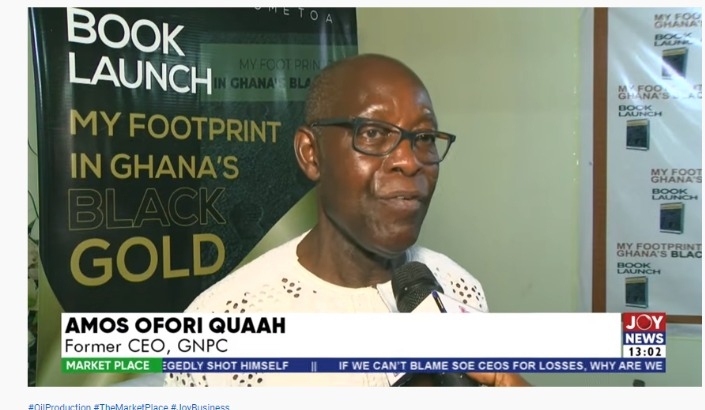 According to him, the country’s current contractual arrangement for petroleum exploration is a bane to the development of the sector and the economy at large.

Speaking to Joy Business at the launch of his book dubbed ‘My Footprint in Ghana’s Black Gold’, Dr Ofori Quaah unraveled the challenges the country went through before discovering oil in 2007.

He explained that some of his colleagues met their untimely death in the quest to search for offshore oil, and therefore appealed for a collaboration between stakeholders of the sector to review the petroleum law.

“We went into this hybrid thing which has not helped Ghana because technically the Production Sharing Agreement stood to give Ghana more of the resources than we have at the moment. It’s a very sad reflection of the industry. I think we should go back to the production sharing agreement”, he advised.

“Personally, I think we should review the agreement and go back to the production agreement because what we are getting is simply not fair for the efforts we put in. Is not fair, we could do better”, he lamented.

Furthermore, he said “I wrote my book because some of our friends passed on due to the offshore discovery. We need to go back to the agreement and review it with the efforts we put in”, he further bemoaned.

On the prospect for Ghana’s oil production, he said it’s still positive both onshore and offshore, hence the need to be resolute as a country with its agreements.

“We have prospect for both onshore and offshore for oil discovery. The Voltarian basin stretches from Nkwakaw to Daboya; and at Daboya we have salt and it’s associated with oil. Potentially, we have onshore oil at the Voltarian basin”, he added

A production sharing agreement is an agreement usually between an oil and gas company and royalty interest owners. This agreement allows the firm to drill horizontal wells that will cross unit boundaries and produce from lands from multiple units.

In production sharing agreement, the government awards the execution of exploration and production activities to an oil company. The oil company bears the mineral and financial risk of the initiative and explores, develops and ultimately produces the field as required.

In June 2007, GNPC together with its partners of the Jubilee oil field – Tullow Oil and Kosmos Energy – announced the discovery of oil offshore Ghana. Tullow Oil explained that the oil discovered offshore Ghana is one of the biggest oil finds in Africa in recent times.