The Russian oil and gas giants listed on the London Stock Exchange have seen their shares crashing after Putin invaded Ukraine last week.

Since last Thursday, when Russia invaded Ukraine, shares in Rosneft, Gazprom, Lukoil, and Surgutneftegas collapsed on the London market, losing as much as $190 billion of their combined market capitalization, or 95 percent, according to estimates from Saxo Group and Bloomberg shared by Saxo Bank’s Head of Commodity Strategy Ole Hansen. 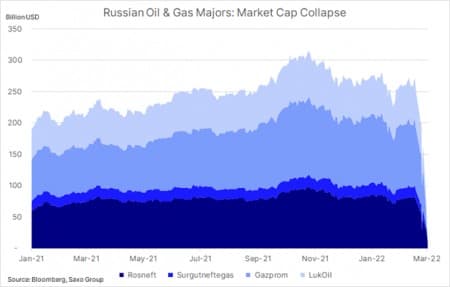 The companies could have seen their market cap crashing in Moscow, too, if the Moscow stock exchange was open. However, following the SWIFT sanctions imposed on Russian banks over the weekend, the Russian ruble collapsed on Monday, ordinary Russians queued at banks and ATMs to withdraw cash, the central bank doubled the key interest rate to 20 percent to avoid a total collapse of the economy, and the Moscow stock exchange said it would not open this week at all.

BP said this weekend it would exit its 20-percent stake in Russian oil giant Rosneft, and will likely take a $25-billion hit from the move. BP has also reportedly canceled all of its fuel oil loadings from a Russian Black Sea port over Putin’s invasion of Ukraine, sources with knowledge of the matter told Reuters earlier this week.

Shell said it intends to exit its joint ventures with Gazprom and related entities, including its involvement in the Nord Stream 2 gas pipeline project. ExxonMobil, operator of the Sakhalin-1 project, starts the process to discontinue operations and develop steps to exit the Sakhalin-1 venture, the U.S. supermajor said on Wednesday. Equinor of Norway has also decided to start the process of exiting its Russian Joint Ventures.