About a week ago, Saudi Energy Minister Prince Abdulaziz bin Salman made waves in the oil community after telling Bloomberg News that Saudi Arabia “…is going to be the last man standing, and every molecule of hydrocarbon will come out.”

The comments by bin Salman—heralded as the most powerful man in the global oil and gas industry—came shortly after the latest OPEC+ agreement and mirrored those by Saudi Aramco CEO Amin Nasser, who expressed similar sentiments back in January 2019.

And this might not be idle bluster: In late 2019, Neil Atkinson, head of the oil industry and markets division at the International Energy Agency, told CNBC that, “There’s going to be rising demand for at least the next decade for oil products, possibly longer, and this is cementing [Saudi Arabia’s] role as the cornerstone player in global markets, the most reliable and biggest supplier in markets.”

Atkinson also highlighted another rarely discussed oil demand headwind: Shrinking populations in key demand locations. According to Atkinson, population growth remains the key driving force for oil demand, which he estimated could peak in the 2030s. 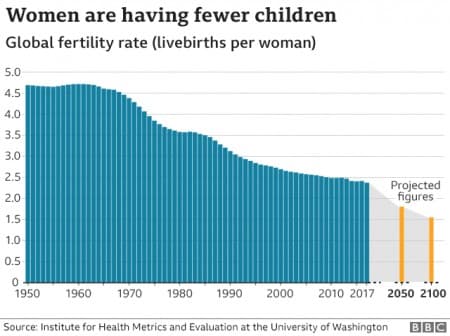 Over the past few years, most of the energy community’s attention has been focused on seemingly more existential crises such as climate change. Now, the focus is on the Covid-19 pandemic. But seldom is population decline mentioned as a major headwind for the long-term oil demand outlook.

Maybe that’s the case because, unlike the other two risk factors, population decline really is a success story being driven by more women in education and work, as well as greater access to contraception, leading to women choosing to have fewer children. Another reason is because population decline is a much slower process whose full effects could take decades to be felt.

But make no mistake about it: Experts are now warning that the world’s population is declining at faster than anticipated rates, which could end up having a dramatic effect on major sectors of the global economy, including energy.

In early July, Researchers at the University of Washington’s Institute for Health Metrics and Evaluation warned that declining and aging populations are no longer a problem for developed economies but, rather, most of the world is currently transitioning into natural population decline.

That’s well below the 2.1 children per woman that’s considered the replacement level for developed nations, meaning the global population will be experiencing massive contraction by the turn of the century.

Indeed, the researchers have projected that the global population will peak at 9.7 billion around 2064 before falling down to 8.8 billion by 2100.

What makes the long-term situation murky for the oil and gas bulls is the large population declines expected in major oil and gas consumers.

India, the third-largest oil-consuming nation, will fare a bit better but will still lose a quarter of its population by 2100. Russia, the 5th largest, is projected to see its population drop between 15-50%.

The Eurozone—a region that consumes as much oil as the United States—is one of the few bright spots. Europe is projected to continue growing its population from 507 million in 2020 to 708 million in 20175 before falling to 689 million by 2100.

However, Europe also has also set some of the world’s most aggressive climate targets, with the European Union having announced a raft of climate change proposals aimed at pushing it towards its goal of becoming carbon neutral by 2050.

The problem of falling populations is likely to be aggravated by an aging crisis.

The world’s number of 80-year-olds is expected to rise from 141 million currently to 866 million by 2100, according to the BBC.

In the United States, the number of Americans aged 65 or older will jump nearly 75% by 2060 from 56.4 million to 98.2 million. This translates into a demand drop for gasoline of about 5% when looking at 2019 usage statistics and assuming an average of 20 miles per gallon, per driver. Miles driven per year drops dramatically from the 55-64 age bracket (11,972 miles per year) to 7,646 for the 65 and over age bracket.

Aging will also adversely affect the economy, with a 10% increase in the fraction of the population ages 60+ estimated to decrease the growth rate of GDP per capita by 5.5%.

Rapid population growth in Africa could take up some of that slack but will likely be far from adequate to stem the tide in the developed world.

Africa is an interesting case not only due to the fact that demographic forecasts of coming decades diverge in a way that could be crucial but also due to the fact that the continent has a huge population that consumes 4.3 million barrels of oil per day, or slightly less than India.

The UN expects Africa’s population to double from 1.3 billion in 2020 to 2.5 billion by 2050 and 4.3 billion people by 2100. The UN reckons that fertility rates in Africa—which have dropped to about 4.4 from 6.7 in 1980—will take another three decades to fall below three children per woman.

However, that underestimates the impact of a big jump in the number of girls who are now going to school across large parts of the continent. In the 1970s, little more than half of all children in sub-Saharan Africa were enrolled in primary school, a proportion that has since shot up to almost 100%.

Lessons garnered from other parts of the world that have recorded such dramatic increases in enrollment rates suggest that this factor cannot be underestimated in predicting the population growth curve. For instance, Iranian women went from having seven children each to fewer than two between the early 1980s and 2006 after a big rise in female education.

Further, although emerging economies have mostly been missing in the ongoing ESG boom, Africa is catching up with the IMF predicting a meaningful shift in African power consumption to renewables by 2050, with most power expected to come from solar and wind by 2100.

Overall, we can surmise that population trends across the globe pose a slow yet real and insidious threat to the long-term oil demand outlook even in lieu of increasingly hostile climate policies by the world’s governments.