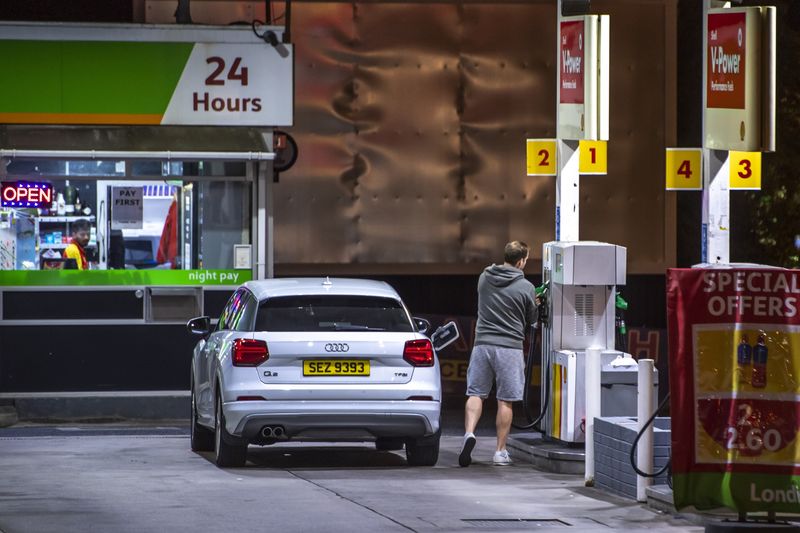 As the cost of filling up a car in the UK sits at an all-time high, the resulting stretch on budgets across the country is uneven.

Drivers in the northeast of England, which spans major cities such as Newcastle, are using almost a fifth of their weekly wages to fill up a standard car with 55 liters of fuel. Residents in Scotland, Wales and Northern Ireland use more than 15% of their income to pump petrol into their vehicles, according to Boiler Central data.

Londoners are forced to pay for the costliest fuel in the country, but higher pay packages in the capital mean drivers have more money to spare than in all other regions. As a whole, British drivers are spending more than 14% of their wages on weekly petrol top-ups.

Last week, UK fuel prices surged by the most in 17 years to underscore the inflationary pressures the country faces. Unleaded petrol jumped by 2.23 pence a liter, the biggest one-day increase since the early 2000s, while diesel climbed to a new record, according to the RAC, a UK motoring organization.

That’s spurring pump prices to close in on £2 a liter (more than $8.50 per US gallon), with motorway service stations already charging more than that for the first time ever. On June 12, Business Secretary Kwasi Kwarteng called for an urgent review of the retail fuel market to assess whether it has hurt consumer interests amid rising prices.

That prompted the Petrol Retailers Association to release a statement Monday saying sellers “have been unfairly scapegoated for rises in the wholesale price of fuel over which they have no control.” Instead, the government should slash fuel duty to ease cost pressures on consumers, it said.

“Our members are operating on razor-thin margins,” said Gordon Balmer, the association’s executive director. “If the government wants to ease the burden of pump prices on motorists, they should cut fuel duty by a much more substantial margin, just as many other governments of European countries have done.”

Wholesale prices for gasoline and diesel have risen faster than those for crude oil, helped by a bottleneck in the global refining system just as demand starts recovering from virus-related restrictions. Another contributor to the UK’s soaring pump prices is the nation’s slumping currency, RAC said.

Rising fuel costs appear to be taking up a larger share of people’s expenditure in the UK, according to a report from from Barclaycard. Spending on energy and fuel increased 34.5% and 24.8% respectively in May, while outlays at supermarkets fell 2%.