The tiny impoverished South American nation of Ecuador is battling to revive its flagging oil industry. The Andean country was floated as a solution for reduced U.S. oil supply because of President Joe Biden’s decision to ban Russian oil imports in wake of President Vladimir Putin’s decision to invade Ukraine. While oil majors such as Shell as well as refiners Valero and Marathon, during March 2022, were sourcing Ecuadorean petroleum the impoverished South American country is incapable of filling the supply gap left by the removal of Russian oil.

Ecuador, which has proven reserves of over 8 million barrels and was once an OPEC member, keeps experiencing major setbacks that are sharply impacting its petroleum industry. Even President Guillermo Lasso’s commitment to doubling the oil-rich Andean country’s production to 1 million barrels by 2025 and earlier reforms undertaken by his predecessor has done little to boost output.

The latest protests by indigenous communities, sparked by rising fuel prices and a sharp increase in the cost of living, have escalated forcing the national government in Quito to implement a state of emergency. Those events, which have seen protestors storm oilfields in Ecuador’s Amazon, forced state-owned oil company Petroecuador to declare force majeure across its operations. That will have a sharp impact on oil output for a country that is seeking to drive a post-pandemic economic recovery by boosting oil industry operations and production. The latest developments indicate that Ecuador will not achieve its forecast 2022 petroleum production target of 580,000 barrels per day, a nearly 22% increase over the 477,3000 barrels per day pumped for 2021. If anything, the latest production numbers and events demonstrate that earlier industry reforms, aimed at attracting greater investment to boost production, and Lasso’s commitment to expanding Ecuador’s oil output are failing. 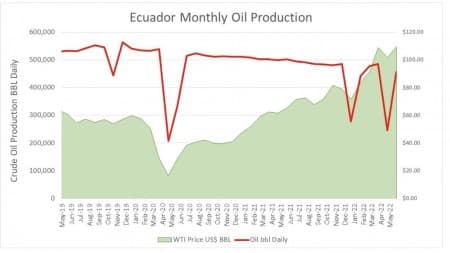 Production outages caused by failing infrastructure remain an ever-present hazard and were responsible for the marked dips in the output shown by the graph. The sharp production decline during April 2020 can be attributed to the shuttering of the Trans-Ecuadorian Oil Pipeline System (SOTE) and the Heavy Crude Oil Pipeline (OCP) which ruptured spilling nearly 16,000 barrels. During that event crude oil entered the Coca River threatening local water supplies and fishing, petroleum even eventually flowed into the Napo River a tributary of the Amazon. There were additional production outages when the SOTE and OCP pipelines were shuttered because of land subsidence in December 2021. The SOTE pipeline eventually ruptured but no oil spilled because it was empty after operations were suspended. Then in late-January 2022 landslides caused the OCP pipeline to rupture causing it to spill 6,800 barrels of crude oil into the surrounding environment, including the Coca River. That has once again caused considerable environmental damage and angered local communities.

Land subsidence leading to outages and ruptures to the SOTE and OCP pipelines remains a constant threat that can lead to a sharp decline in Ecuador’s oil production. Both pipelines crucially connect the Andean country’s oilfields in the Amazon Basin, where most upstream operations are located, to the Pacific port city of Esmeraldas. When the SOTE and OCP are out of service, because of maintenance or ruptures, drillers are forced to suspend operations, thereby sharply impacting Ecuador’s oil output. This will remain an ever-present operational threat until the land subsidence issues in the region surrounding the Coca River are resolved.

Those recent pipeline ruptures and oil spills are also causing community dissent against Ecuador’s oil industry, especially in the Amazon, to accelerate leading to a rapidly disintegrating social license. This has come to the fore with the current protests sweeping Ecuador and the capital Quito. Last week indigenous protestors forced (Spanish) the Chinese government-owned PetroOriental, which operates blocks 14 and 17 in the Orellana Province in the Amazon taking 1,400 barrels per day of production offline. PetroOriental was the subject of an earlier lawsuit brought by the Indigenous Waorani from Ecuador’s Amazon who alleged that the company was contaminating ancestral lands through the practice of flaring. After a court in the Amazonian province, Orellana ruled in favor of PetroOriental the plaintiffs vowed to appeal the decision.

Attempts by protestors to enter the Petroecuador-operated Limoncocha oilfield in Block 15, which also impacted Block 61, forced Ecuador’s national oil company to shutter operations, reducing production by a total of 1,500 barrels per day. The protests are intensifying with roadblocks, oilfield invasions, and other anti-government actions expected to weigh heavily on Ecuador’s June 2022 crude oil output. According to government data national oil production for 16 June 2022 averaged 458,997 barrels which were 5,732 than for 1 June 2022 when Ecuador pumped 464,729 barrels of crude oil. Petroecuador declared force majeure for its operations on 16 June 2022 bringing oil exports to a halt. The protestors have vowed to continue their actions until a range of demands is met by Lasso’s administration, including a halt to further mining and oil projects. Such events indicate that Ecuador’s oil production from that date will fall even further, potentially to the lows witnessed when the SOTE and OCP pipelines were shuttered.

The industry fallout from the protests in Ecuador and the petroleum industry’s rapidly disintegrating social license is further complicated by a February 2022 Constitutional Court ruling. The Andean country’s most powerful tribunal’s finding awarded indigenous communities’ final decision over oil and mining projects that affect their ancestral lands which cover up to 70% of Ecuador’s oil-rich Amazon.

For these reasons, Lasso’s plan to ramp up Ecuador’s oil output to 1 million barrels per day is unachievable. Since June 2021, average monthly oil production, which has been less than 500,000 barrels per day, has been steadily declining only averaging 456,000 barrels daily for May 2022, or 9% less than a year earlier. A combination of oilfield invasions, road blockades, and other protests will cause further production declines over the short term. The recent Constitutional Court decision which gives indigenous communities the ability to veto oil projects impacting their lands, which lie in Ecuador’s Amazon the country’s most oil-rich region, further weighs on the ability to expand petroleum industry operations. Those factors along with a history of heavy-handed state intervention in extractive industries are weighing heavily on Ecuador’s appeal to foreign energy companies. It is for these reasons that foreign oil companies will continue to view Ecuador as a high-risk jurisdiction thereby deterring further urgently required petroleum investment.