The COP26, held in Glasgow last year, saw participating countries pledge that they will wean themselves off coal, a promise that has seen very limited progress since. Meanwhile, the IEA in its annual report titled Net Zero by 2050 warned that if the world is to reach the net-zero goal by 2050 there should be no new investments in oil, gas, and coal developments. That was in 2021. Today, floods are sweeping Bangladesh, India, and China. Food shortages are causing problems in the developing world with countries like Peru, Sri Lanka, and Ecuador suffering from large-scale protests and political instability. Meanwhile, heat waves of unprecedented magnitude have caused blackouts on a massive scale.

About 7 million Bangladeshis are still in need of help in the aftermath of floods that killed 101 people earlier this month. Meanwhile, floods in India have displaced millions and there has been an additional challenge of water-borne diseases.

In southern China, thousands of people have been affected by flooding. Meanwhile, Pakistan has been baked by a record heat wave amid an energy shortage which meant that some areas were experiencing load-shedding every hour earlier this year.

These developments present a challenge to global policymakers as, on the one hand, they highlight the need to address the climate crisis and, on the other hand, they have also emphasized the fact that an abrupt transition will prove fatal.

Extreme weather such as heat waves and floods—or droughts, like the one looming over California—highlight the urgency and significance of addressing the issue of climate change. Yet, this is unlikely to happen through emission reduction, especially since, per The Economist, the amount of global emissions is now 0.6 percent higher than before the pandemic. 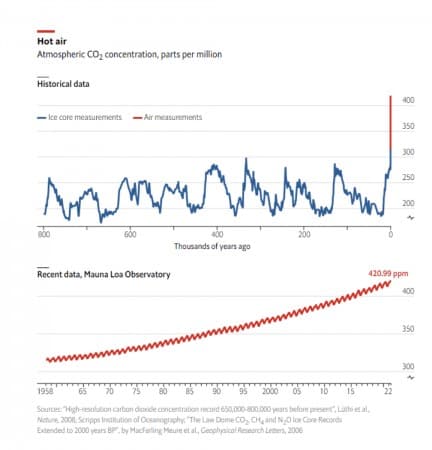 While the world suffers from the changing climate, it is also suffering a deepening shortage of energy due to geopolitical conflicts and underinvestment. This is where the dilemma of modern political decision-making lies.

The world needs energy that it will consume regardless of emissions. Yet it would be much better for the planet if this energy comes with a small emission footprint. The trouble is that the low-carbon energy we already have is not performing well enough to replace fossil fuels. It might, therefore, be time to start thinking about adapting to the changing climate rather than deluding ourselves that we can reverse processes that took hundreds of years within a couple of decades.

Right now, energy security is taking precedence over emission reduction. Germany, one of the champions of the net-zero movement, is urgently building LNG import terminals and increasing coal power generation to make up for an anticipated shortage of Russian gas. The message: Yes, we know it’s fossil fuels but it’s only for a little while.

Meanwhile, the U.S. president is traveling to Saudi Arabia and while the official line is that he is not going there to ask for more oil, it is widely accepted that oil is a key factor in the visit. Americans are beginning to get tired of record-high prices at the pump while inflation runs at 40-year highs, and Biden needs to do something about it. Emissions reduction has taken the back seat, but it will soon become a major focus again.

All this points to the fact that humankind needs energy. Period. And because most of that energy is still coming from and will continue coming from fossil fuels, it may be time to change the climate change tune about an abrupt transition to something more realistic.

In this regard, the solution proposed by Fernando Hernandez, principal at Hernandez Analytica and Business Ambassador to Scotland, is very instructive. The Energy Basket approach takes on a non-binary approach where it advocates the creation of a grid that has a mixture of both conventional fuels and renewables with the long-term aim of moving towards renewables completely. It also caters to the major policy problem right now i.e. energy management in terms of contingency planning.

Also, another approach that the authors endorse is that of realizing the importance of pathways and moving to the phrase “energy transitions” (yes, pluralized). It means that the world should expect that there will be different pathways for different countries to reach net zero.

A holistic approach to the global energy transition is the need of the hour and current geopolitical tensions have given us a much-needed reality check.