Some Much Needed Substance On The Russian Oil Debate

Events occur in the energy market almost too fast to properly catalog these days. The torrent of information is cacophonous as one dire prediction for the direction of the oil price after another rolls across the ticker. Nonetheless, it behooves us to try and ferret out relevant details from this torrent of data. As I applied myself to this task one thing, in particular, became blindly apparent to me. The substance behind most of what I was hearing was pretty thin. As in almost non-existent thin. We will avoid the political side of this debate and focus on the impact on our wallets and the ability to pull up to a gas pump and fill up our F-150s.

The last week and in the early part of this week, one emerging aspect of the energy market struck me. People were now talking about the increasing likelihood of banning Russian imports to the U.S, and one of them was Joe Biden. Sanctions talk for oil began to ramp up in earnest, and the talk had gone from no-how, no-way to it just might happen. On Tuesday, President Biden acted to go it alone and block Russian oil from coming to the U.S. Europe, where winter runs a bit longer, simply can’t follow suit and will continue to purchase Russian oil and gas. What is the impact of this decision on Americans?

Now, at first glance, this appears to be just a great idea that helps starve the Russian war machine of capital. We only import about 600K BOPD from Russia, a relatively small amount that picking up about 50 rigs could replace. So what’s the problem? It turns out, we need Russian oil, or something like it. And therein lies the rub. We don’t produce much of what we need in terms of blending stock, heavy oil that is.

Now we are looking high and low for replacements in a lot of places with less than savory reputations, and some under U.S. sanctions currently. As I have explained in various places recently, oil companies need blending stock to improve the API gravity of the throughput from their refineries. As the BTU Analytics graph below shows, the major fracking basins that produce most of the ~9 mm BOPD that we rely upon, produce very little of this heavy oil. That’s just life. 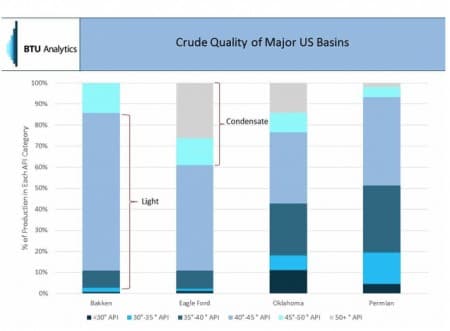 What this means though is that we have to replace like for like in terms of API gravity oil, and once again therein lies the rub. Nations that the president is contacting to ease the strain on American motorists include: Venezuela, Saudi Arabia, and Iran. What is the likelihood of our “friends” in these far-flung places coming to our rescue?

Venezuela has been under the thumb of U.S. sanctions for several years now, forcing the country to look for assistance from Russia as this WSJ article notes. Recently a delegation from the U.S. flew to Caracas to discuss relaxing sanctions on that country, so the U.S. could buy more oil. This Reuters article suggests that Nicholas Maduro, the Russian puppet dictator in Caracas, has learned the art of negotiation well from his patron Vladimir Putin over in Moscow. Instead of a big “Nyet,” the two parties agreed to a basis for future negotiations. Venezuelan production, most recently at around 800K BOPD, has been heading eastward to China in order to evade the sanctions. Orinoco grade crude is so thick and heavy that it needs a diluent to pump at ambient temps, and our friends in Tehran helped with that, so some 2-mm barrels went to repay Iran. The thought that Venezuela has meaningful excess production to send to the U.S. stretches reality just a hair.

Saudi Arabia and the U.S. are not on the best of terms these days. In days of yore an exhortation by the U.S. president to, “pump more oil,” would have had considerable sway. Since we indelicately pinned the murder of Khashoggi on the Crown Prince, Mohammed bin Salmon has been cultivating other relationships. Specifically with Russia as it happens, including a military cooperation agreement. With the additional de facto membership of Russia in OPEC+, the notion that President Biden was ever going to shake any extra oil loose in Saudi Arabia, is chuckle-worthy. In fact, the trip isn’t going to happen at all, I am hearing. Astoundingly, according to an article in The Wall Street Journal, the Saudis didn’t take the call from the American president.

“Saudi Crown Prince Mohammed bin Salman and the U.A.E.’s Sheikh Mohammed bin Zayed al Nahyan both declined U.S. requests to speak to Mr. Biden in recent weeks, the officials said, as Saudi and Emirati officials have become more vocal in recent weeks in their criticism of American policy in the Gulf.” 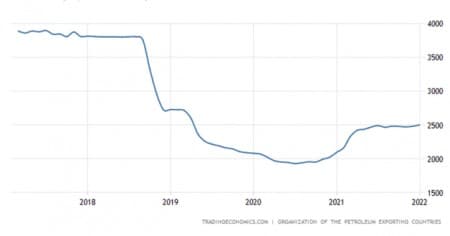 I would be surprised if that’s ever happened before.

That brings us to Iran. Iran has also been under U.S. sanctions since time immemorial and basically does just fine. It turns out another ‘close-friend’ of the U.S. has been helping them evade the full impact of our sanctions. That would be China. You can see from the graph below, only about 1.5 mm BOPD remains unsold thanks to Mr. Xi.

As if Iran and China’s relationship wasn’t much closer than we’d like, Putin has been nosing his way into their sphere to expand his influence in the Middle East. It looks as though the only likely opportunity to put more oil on the market, lies with the re-entry of the U.S into the Iran nuclear accord. It’s anybody’s guess if the leadership in that country will send it our way.

For good or ill, the president just eliminated about 3% of our oil supply. That doesn’t sound like much, but remember how tight supplies are, and as I have established oil quality matters. The loss of these barrels is going to raise prices. One thing the president didn’t do is give any sign that he was going to pivot toward U.S. production. That simply is politically unacceptable to his base, which is about what he has left in terms of support.

It is also curious that he didn’t mention our two closest trading partners, Canada and Mexico with this address. Canada is supplying most of our imports now – about 3.5 mm BOPD, and could certainly do more. If Biden hadn’t canceled the Keystone XL pipeline, which would have been just about finished by now, it would have certainly helped in this regard. There are other ways to get more production from Canada should the administration choose to seek assistance from that source. New production from Mexico might be problematic, as they are focused on their own energy needs from declining fields, but would have way more reason to help than either of the three countries he did mention. Curiosities on energy policy are a hallmark of the current administration. It is difficult to say that one is more notable than another.

For now, Americans should resign themselves to paying more for energy, and consider themselves lucky when they have it. Security of supply is no longer as certain as it once was just a short time ago.

Source: Some Much Needed Substance On The Russian Oil Debate | OilPrice.com