Stakeholders Call for a Forum on Fiscal Regime in Petroleum Industry 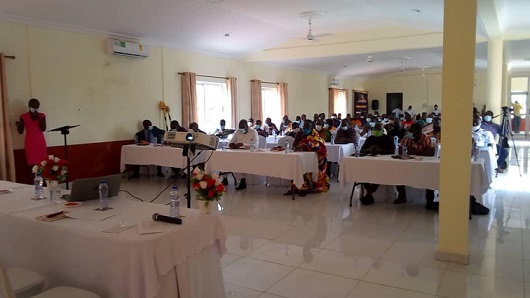 Stakeholders in the Oil and Gas Industry have proposed a forum on the fiscal regimes in the petroleum sector to determine which option will offer the country the maximum revenue.

Specifically, the forum will consider the Hybrid System of Petroleum Fiscal Regime and the Petroleum Sharing Agreement (PSA) to determine which of the two options could give Ghana a better share of revenue from its oil and gas resources.

The stakeholders proposed this during a stakeholder’s forum in Takoradi that discussed Contract Type or Fiscal Regime on Ghana’s Oil find to agreements under production sharing. The forum analyzed money that Ghana could have earned for its oil under different agreements.

Analysis showed that the minimum Government derived under PSA was between 42 and 60 per cent (at no additional cost), a view that is supported by the United States (US) Government Office as optimal revenues to a host country for allowing its oil resources to be exploited under any oil contract.

Speaking at the forum, a Senior Research Officer at the Ghana Institute of Governance and Security (GIGS), Mr Solomon Kwawukume, said Ghana opted for more complicated and highly unprofitable royalties and hybrid systems.

As part of the PSA Campaign in Ghana, Mr Kwawukume challenged the Institute of Economic Affairs (IEA) to come out and prove how PNDC Law 84 was outdated at the time when the nation started producing oil which made the contracts unfavourable to Ghana.

A former Minister for Petroleum and Energy, Mr Emmanuel Armah-Kofi Buah, said Ghana at the time of oil discovery in 2007 had a choice to make but fast-tracked oil development instead of long-term planning with very serious consequences.

“It is probably time to revisit this issue in a national setting where all stakeholders will be there with the facts and numbers, advantages and disadvantages,” he said.

Mr Kofi Buah urged stakeholders to understand that institutions like the Ghana Revenue Authority (GRA), Petroleum Commission and the Ministry of Finance, among others, had a lot to do with the numbers and whether they had been shortchanged.

“It cannot be a one-sided debate. The numbers being thrown around must be scrutinized and experts in and out of government must be part of the discussion. But I share the view that the time has come for a national review,” he stated.

Mr Kofi Buah also advised that although Ghana had good policies, the country ought to be pragmatic enough to make changes.

He cited examples of some of the good policies in Ghana to include the Non-Gas flaring policy among others.

He lauded the passage of the Petroleum Revenue Mobilization Act (PRMA) to guide the utilization of petroleum revenue and protect future generations and said it was an exception in Africa.

Also, he said the passage of the Local Content Act to ensure Ghanaian participation in the upstream sector was also commendable.

Reacting to the results of the analysis presented by the resource persons, Mr Nemi Kwasi Nemi of the Concerned Citizens of Nzema Descent and other stakeholders, wondered why previous regimes in Ghana had opted for the Hybrid System.

They called on the citizenry, especially the elite, to add their voices to the call to review and revise Act 919 to change it from the Hybrid System to the more superior Petroleum Sharing Agreement, which many countries, including Nigeria, had adopted and were enjoying greater benefits.