The Impact of Energy Inflation: A $2-3 Trillion Wealth Transfer

Energy prices remain stable for years, then spike, then revert back to old levels. Occasionally as in the 1970s during the Oil Embargo and Energy Crisis they really spike. And in 2021-2022, thanks to the Ukraine war, they rocketed up again. But how much impact do these episodes have on the economy? We decided to look at the question like this: how big are expenditures to consume energy in relation to gross domestic product (GDP). Figure 1 shows energy expenditures as a percent of GDP for the Organization for Economic Cooperation and Development (OECD) which is, basically, an economic club for the developed nations, a few of which have oil or gas production, plus the United States. (The comparison may suffer from use of different sources, but the trends and order of magnitude probably tell the story anyway.)

Figure 1. Expenditure on energy as a percentage of GDP 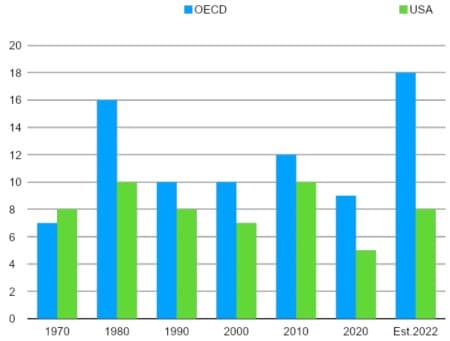 Notice that OECD countries generally spend a greater percent of GDP on energy than the USA. This may reflect abundant low cost coal, natural gas, and hydroelectricity in the United States—resources not easily exported to the rest of the world for much of the time studied.

This time around the difference in energy costs between OECD and USA is even starker. The US is now energy independent and even an exporter of energy. A substantial part of the higher energy bill in OECD countries serves as a transfer payment to energy supplying nations and of course a substantial drain on their economies, from OECD consumers to foreign oil and gas producers. In the case of the US, on the other hand, higher energy bills simply transfer wealth from American consumers to American energy producers, who have been quick to charge world prices. (That’s competition, one oil executive explained to some members of Congress a while ago.)

Let’s put those percentages into dollar cost. For the OECD, the sharp hike in energy spending between 2020 and 2022 will come to about $5.5 trillion (with the USA accounting for about $0.6 trillion of the total). Probably $2-3 trillion of that total will go into the pockets of non-OECD oil producing nations. Think what we could do with that money.

After the Energy Crisis of the 1970s, energy policy makers urged consumers to find ways to use energy more economically and they succeeded. They did not call for a thorough transformation of the energy market because they had no alternatives to what existed. Just use it better. This time around, alternatives to traditional fuels and delivery are available (solar and wind and energy storage), and more on the way (possibilities include organic solar panels, hydrogen as an aviation fuel, electricity for vehicles, green hydrogen, fusion, small modular reactors and fuel cells). Maybe we can pay for some of those alternatives with the $2-3 trillion we now pay to foreign oil and gas producers.