The World Needs To Keep Investing In Oil Production To Avert A Crouch Even As Energy Transition Is Underway.

It has been established that the use of fossil fuels is severely damaging our environment. Fossil fuels cause local pollution where they are produced and used, and their ongoing use is causing lasting harm to the climate of our entire planet. However, altering our ways fully has been a great challenge (Gross , 2020).

Oil production may phase out eventually, but that won’t be in the near future. Even if demand doesn’t peak, companies like ExxonMobil Corporation and Royal Dutch Shell Plc need to keep investing tens of billions of dollars every year into fossil fuels just to stand still. Presently, many investors would prefer to take that cash in dividends, or see it channeled into renewables (Herron & Smith, 2021).

A recent report from the International Energy Agency established the fact that the oil and gas industry as a whole spent just 1% of its capital expenditures (money spent on physical things) on clean energy (Domonoske, 2020). This implies oil production will be the cash flow to sustain renewable energy investments. Thus, oil production is the backbone of clean energy. This cycle can take another 25-40 years depending on the continent and technology advancement.

Many experts almost believed that the COVID-19 outbreak was the beginning of the end for oil production. The idea that the pandemic was a blessing in disguise for the energy transition and could help save the planet is quite a misguided thought. Firstly, distorting the world’s economy is not the best strategy to deal with climate change. A surge in oil-prices would be a big economic turmoil for a world still recovering from the pandemic, especially in developing countries where the effect will be felt harder.

The hard truth is that there is still not a complete substitute for oil in terms of its availability and fitness for purpose. Although the supply could be limited, oil is still in abundance with many untapped resources and the technology to extract it continues to improve, making it ever-more economic to produce and use. The same is also principally the case for natural gas (Gross, 2020).

OPEC has identified oil production concerns mainly in light of the pandemic. The question of how production capital today could sow the seeds for extreme volatility down the road still remains. The key focus should be placed on determining which investments can produce the lowest cost and lowest emitting barrels of oil and units of gas (Barkindo, 2021). Thus, oil production should still remain constant but with more efficient methods to reduce emissions.

Climate change activists may have enjoyed some key milestones in recent times, including an activist hedge that managed to elect three new directors to Exxon’s board in a direct rebuke to Exxon’s oil-centric investment plans, and a ruling from a Dutch court ordering Royal Dutch Shell to lower emissions.

However, in the light of all these exhilarations, reality cannot be eluded. Which is, unless the world’s governments and consumers (especially Africa) make significant changes enough to ignite an instantaneous shift in corporate plans, oil and gas companies are really not on track to move their investments as rapidly as analysts say the planet requires. Even among European companies where the push has been more, green investments so far have been overshadowed by their investments in oil and gas. 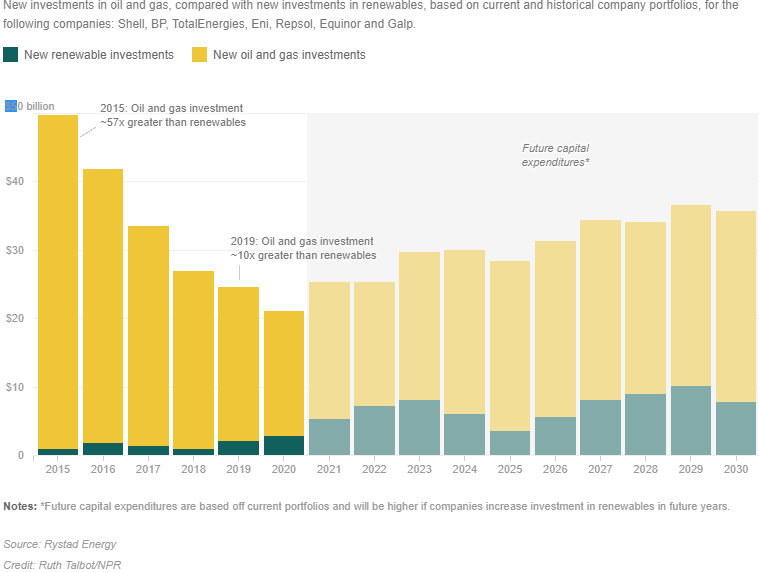 To conclude, Oil and Gas companies play a major role in the energy transitioning process. As such they cannot go broke and must stay relevant. One way they can stay alive is via the production of more oil to maintain a healthy cash flow.

However, they will need to do this with less carbon emission methods. Oil production is a great avenue to support and popularize the push for clean energy. We have seen this via the offshore wind technology.

Even though other sources of clean energy do not greatly affect climate like oil, they are quite expensive especially in developing countries and also taking time to be deployed on a global scale. There needs to be a streamlined change management procedure which must be realistic and agreed by governments, consumers, oil companies and green energy activists.