Oil prices plunged on the back of the discovery of a new Covid variant, but Omicron isn’t the only bearish factor in today’s oil markets.

The resurgence of tensions between China and the U.S. could well spark another trade war between the two superpowers.

A strong U.S. dollar and rising inflation will also play a role in pushing oil prices down even if Omicron fears subside

Just when the world started to embrace some normalcy in terms of the global economy and social mobility, a new variant from South Africa, technically called B.1.1.529 and named Omicron, has emerged as policy-makers, politicians, and investors brace themselves for yet another wave of Coronavirus-related restrictions.

The UK has already put a ban on people traveling from certain African countries, so has the U.S. others are following suit. The new strain rocked the oil markets as the Brent benchmark lost 10.7 percent in a single day when the news came out – the largest single-day drop since April last year. While this will be the focus for oil markets in the coming weeks and days, it isn’t the only bearish factor in oil markets right now. Three interrelated factors, namely the U.S. – China trade war, a rising dollar, and soaring inflation, will also hinder oil’s much-talked-about ascent to $100 (the price many banks and institutions tend to think oil will eventually return to).

Brent and WTI both plunged on the day the news came out, and despite a brief respite have continued to trend downward since. Countries such as the UK, the U.S., Brazil, India, Japan, Australia, Thailand, and Canada have either imposed travel bans or are in the process of doing so on flights from Africa. This has caused renewed fears of lockdowns.

However, there have been some important developments vis a viz the U.S. China trade war as well. China has criticized the U.S. for placing dozens of its companies on a blacklist, the famous Entity List, and said that it could hamper the progress made so far in terms of thawing economic relations between the world’s two largest economies. At the same time, China told its ride-hailing service Didi to delist from the New York Stock Exchange on “concerns about data security”. Furthermore, China failed to meet its target in terms of imports from the U.S. as part of the trade deal. As the graph below shows, it was only able to meet 56 percent of its promised amount. 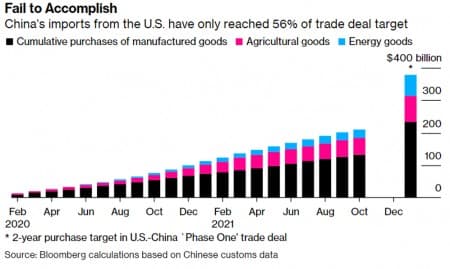 The following breakdown by Peterson Institute For International Economics is interesting. 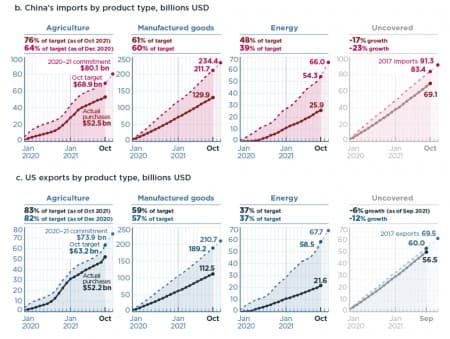 After a recent virtual meeting between Biden and Xi, the idea of reducing tariffs remain questionable. Any further escalation due to the above and further developments could cause another period of economic instability between the U.S. and China, playing down investor sentiment globally and affecting oil prices as it did back in 2018.

Another factor that could play a huge role in negatively affecting the demand for oil, and by extension the price of oil, is the rising dollar. Due to the release of promising economic data, strong consumption numbers, and prospects of rising interest rates as the Fed moves to pursue a more Hawkish policy, the dollar index has been rising and now stands at 96, its highest since June 2020. HSBC, JP Morgan, and others have already made calls indicating that the dollar may rise further.

There is an inverse relationship between the dollar and commodities as they are priced in USD. As such, a rising dollar makes it difficult for other countries, such as emerging economies that are already under immense fiscal pressure due to Covid-19, to buy commodities such as crude oil. This fall in demand will then drive down prices. This threat of a strong dollar could continue into next year due to the third bearish risk for oil prices: rising inflation. 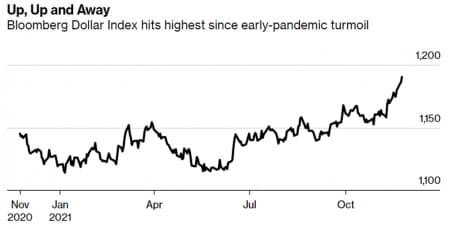 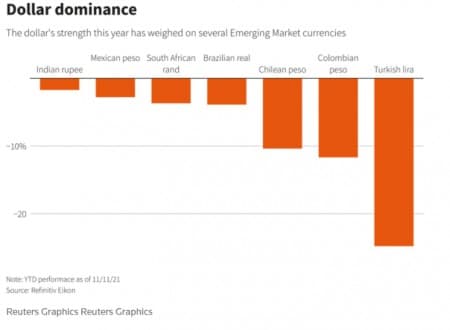 It is no surprise now that the spectre of inflation is scaring central banks across the globe. Inflation fears come as a result of a multitude of factors such as rising shipping costs, a huge gap between prices paid and prices received, the low sale to inventory ratios, historic amounts of cash in the form of Covid-19 support packages, and much more. Against this inflationary backdrop, countries worldwide are fighting rising prices especially of food, which according to U.N.’s Food and Agriculture Organization, is at a 10 year high.

Inflation in the U.S. is amongst the highest in the world standing at a concerning 6.2 percent, with prices increasing at their highest pace in 30 years. This isn’t confined to the U.S. only as inflation rates in the UK have touched 4.2 percent and the cost of living is rising at the fastest rate in a decade. For emerging markets, it is even worse. 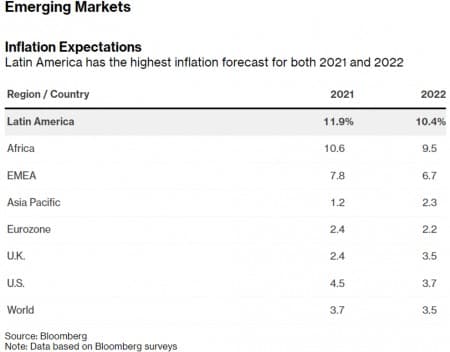 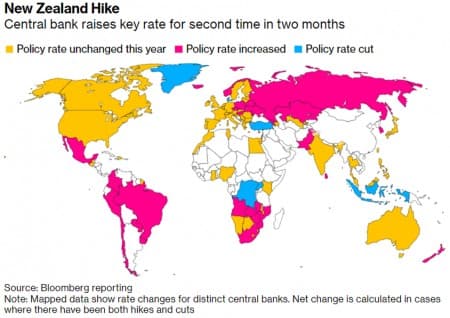 So while Omicron remains the biggest concern in the short term for oil markets, the possibility of a renewed trade war between the U.S. and China, the rising dollar, and soaring inflation with rising interest rates are all long term systemic risks that the markets seem to be oblivious of these days.