Following publication of BP’s annual Statistical Review, each year Rystad Energy releases our own analysis of the global energy landscape to provide an independent, data-based comparison and evaluation. Continuing the trend from previous years, Rystad Energy’s 2022 review shows a sizeable drop in recoverable oil resources in what could deal a major blow to global energy security.

Of the 1,572 billion barrels of technically recoverable oil, only about 1,200 billion barrels are likely to be economically viable before 2100 at $50 per barrel. This economically extractable oil would contribute about 0.1?C of additional global warming by 2050, and somewhat less by 2100 thanks to natural carbon sinks.

“While the drop in oil availability is positive news for the environment, it may threaten to further destabilize an already precarious energy landscape. Energy security is a matter of redundancy; we need more of everything to meet the growing demand for transport and any action to curb supply will quickly backfire on pump prices worldwide, including large producers such as the US. Politicians and investors can find success by targeting energy consumption, encouraging electrification of the transport sector and drastically improving fuel efficiency,” says Per Magnus Nysveen, Rystad Energy’s head of analysis. 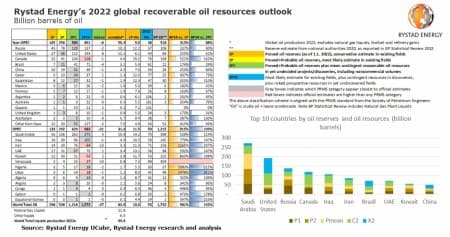 Looking at the longer-term picture, Rystad Energy has updated our estimates for total undiscovered oil from 1 trillion barrels in 2018 to 350 billion barrels in our latest report, due to a rapid collapse in investor appetite for exploration exposure, leading to fewer government leases. This downward revision is good news for carbon compliance but could have negative consequences for global energy security, particularly if electric vehicle adoption falls short of expectations.

The broader climate implications of the total recoverable oil are broadly positive. If all remaining recoverable oil was to be burnt immediately, the global warming impact would be +0.25?C, based on 350 kg of CO2 per barrel and +0.1?C warming per 220 Gt CO2 emitted. However, only 35% of carbon emissions from that oil would still be in the atmosphere in 2100, as it takes 80 years for CO2 to be naturally removed from the air. Also, not all oil is burnt for energy; for example, carbon in plastics is released into the atmosphere only if incinerated.

How long can proven reserves last?

Rystad Energy’s updated report includes revisions for proven reserves. Here, we apply a consistent set of conservative probabilities, as opposed to official reporting by authorities which are considered less consistent. This year we found significant differences between OPEC and non-OPEC members in the longevity of proven reserves. All OPEC countries have proven reserves that are expected to last over 10 years, ranging from Iraq with just over 10 years to more than 14 years in Saudi Arabia. In non-OPEC member countries, Mexico ranks last among individual countries with fewer than five years of proven reserves, whereas Canada’s reserves are projected to last almost 20 years.

Where is all the oil?

Bucking the trend of most countries losing oil resources this year, the US added 8 billion barrels to its discovered resources.

The timestamp of Rystad Energy’s newest resource assessment is 1 January 2022. In other words, our analysis illustrates where the remaining recoverable resources of each country stood at the beginning of this year.