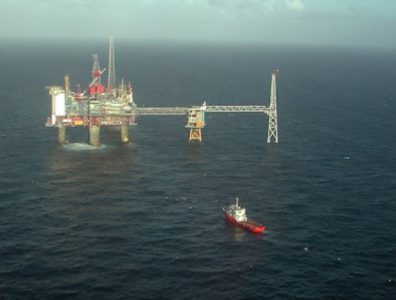 TotalEnergies has announced that it and APA Corporation have made a “significant” new oil and associated gas discovery at the Krabdagu-1 well in the central area of Block 58, offshore Suriname.

Krabdagu-1 was drilled at a water depth of 2,559 feet and encountered approximately 295 feet of net oil pay in good quality Maastrichtian and Campanian reservoirs, TotalEnergies revealed. Further operations will be carried out on Krabdagu-1 to appraise the resources and productivity, according to TotalEnergies, which noted that at least three further exploration and appraisal wells are planned to be drilled in 2022 on the block.

“This successful exploration well at Krabdagu-1 is a significant addition to the discovered resources in the central area of Block 58,” Kevin McLachlan, the senior vice president of exploration at TotalEnergies, said in a company statement.

“This result encourages us to continue our exploration and appraisal strategy of this prolific Block 58 in order to identify sufficient resources by year end 2022 for a first oil development” McLachlan added in the statement.

In January 2020, the business revealed that it and Apache had made a material oil discovery with the Maka Central-1 well on Block 58. Total outlined at the time that the find was “on trend” with the “prolific” discoveries in the adjacent Stabroek block in Guyana.