Nearly two years after Turkey halted offshore gas explorations in contested waters in the eastern Mediterranean, a Turkish drillship has departed from the port of Mersin to search for gas in the region.

The Abdullhamid Han drillship set sail on Tuesday with the blessing of President Recep Tayyip Erdogan, who said that the ship would operate 55km (34.2 miles) off Turkey’s coast in an area within the country’s sovereign territory.

“The survey and drilling work we are conducting in the Mediterranean are within our sovereign territory. We do not need to receive permission or consent from anyone for this,” Erdogan said at a ceremony to launch the ship.

The eastern Mediterranean, with its substantial natural gas potential, could become a flashpoint for regional and wider disputes after the Russian invasion of Ukraine triggered a global energy crisis and sent importers scrambling for alternative hydrocarbon sources.

Energy minister Fatih Donmez had announced on July 26 that the 238-metre-long (781-foot) last-generation drillship would leave Turkey for an unspecified location.

A day prior to Donmez making the announcement, Cyprus’s energy minister, Natasa Pilides, said Europe’s drive to slash reliance on Russian natural gas had boosted the strategic importance of its offshore finds.

“Europe is a good potential customer for Cypriot gas,” Pilides told Bloomberg. “The EU has confirmed that natural gas will remain a bridge fuel up to 2049 as part of the green transition so companies now have the comfort of being able to secure long-term contracts.”

Gas explorations have been continuing in Cypriot offshore blocks since gas fields were discovered in the early 2000s. Preliminary results from the latest appraisal drilling by a consortium of France’s Total and Italy’s ENI this week confirmed large natural gas deposits in bloc 6 of Cyprus’ Exclusive Economic Zone (EEZ).

Pilides said that, as a small country, Cyprus does not need much natural gas for domestic purposes, leaving more for export.

But Turkey – which in 2019 footed a $40bn gas import bill and does not recognise Cyprus as a sovereign state entitled to its own EEZ – has asserted its “sovereign right” to drill for energy reserves off the divided island.

“Turkey has a long-term plan of being an energy hub in the region and playing an important role in EU energy security,” Umud Shokri, a Turkish senior foreign policy adviser, told Al Jazeera.

Its ambitions, however, have repeatedly been frustrated. In January 2019, the Eastern Mediterranean Gas Forum – a multinational body headquartered in Cairo – brought together governments including Israel and the Palestinian Authority, but excluded Turkey.

A year later, Cyprus, Greece and Israel signed an agreement to build the 1,872-kilometre-long (1,163-mile) EastMed pipeline to transport Cypriot offshore gas to Greece and Italy. While partially cutting through maritime areas claimed by Turkey would have been the fastest and cheapest route, the project steered clear of the areas.

“Turkey is being left out of the equation” in the eastern Mediterranean, Shokri said.

Cyprus has long been contended between Turkish and Greek Cypriots. in 1974 a military coup in Cyprus aimed at uniting the island with mainland Greece led to a Turkish invasion of the northern third of the island and an enduring division.

The self-declared Turkish Republic of Northern Cyprus does not recognise the right of the internationally recognised Republic of Cyprus – a member of the EU since 2004 – to award exploration rights to foreign companies without its consent.

Ankara sent Turkish oil and gas drilling ships to waters off southern Cyprus in May 2019 as part of its Mavi Vatan (Blue Homeland) naval expansion doctrine.

In November 2019, a month after sending the Yavuz drillship to exploration blocs that Greek Cypriot authorities had awarded to ENI and Total, Turkey signed two memorandums of understanding with Libya’s UN-recognised Government of National Accord (GNA) expanding Turkey’s maritime boundaries with the north African country. The move paved the way for Greece to sign a similar deal with Egypt in August 2020 to delimitate their respective maritime jurisdictions.

Greece and Turkey were on the verge of military confrontation in August and September 2020, after Turkey launched its seismic survey ship Oruc Reis accompanied by a small naval fleet to explore for oil and gas in areas which Greece claims as part of its continental shelf and EEZ but which Turkey disputes.

On the Turkish Cypriot side of the divided city of Nicosia, Cavit Atalar, the head of the Department of Petroleum and Natural Gas Engineering at Near East University, welcomed the departure of the Abdullhamid Han.

“Turkey had to make a move to make sure that our rights are upheld,” he said.

He said the Cypriot dispute needs to be solved before anyone can go further with gas exploration off Cyprus.

“We cannot let the Greeks carry on as if they were the owners of Cyprus – they are not.” 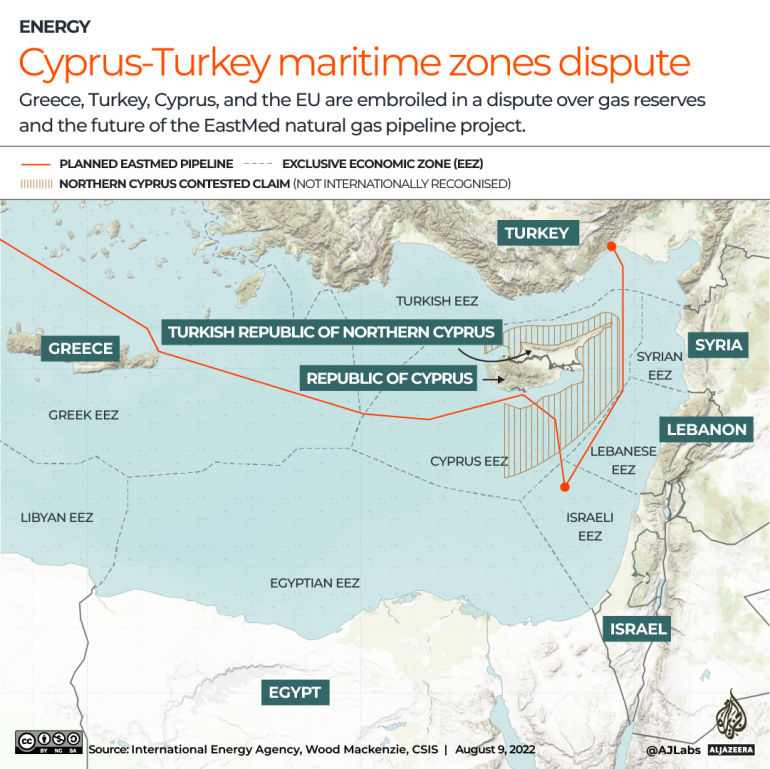 On the other side of the wall dividing the capital, Theodoros Tsakiris, an energy expert at the University of Nicosia, expressed concern about the possibility of renewed exploration activities in contested waters but said they would not be “an inhibitor to the development of regional reserves”.

“Cyprus will not stop the monetisation of reserves in the EEZ,” the analyst told Al Jazeera.

At the same time, Cypriot authorities are unlikely to comply with the request of Northern Cyprus to have a seat at the table when awarding drilling rights.

“Asking a secessionist entity for permission to negotiate with ENI or Total is tantamount to recognising it as a legitimate interlocutor at the international level,” Tsakiris said.

The dispute is also a problem for the European Union. According to Tsakiris, the Cypriot fields by themselves could offer Europe more than the entire net gas exports of Azerbaijan, a country the bloc recently turned to to boost provisions.

“This is very significant because there is no domestic demand and Cyprus could export essentially 100 percent of what is discovered, provided it is commercially viable,” the analyst said.

In addition to the Cypriot fields, the EU is also relying on boosting imports from Israel, which is also engaged in a maritime border dispute with neighbouring Lebanon.

To transfer gas reserves from the eastern Mediterranean region, the EU has also been looking at the possibility of reviving the six-billion-euro ($6.1bn) EastMed pipeline, despite the US withdrawing its support in January due to concerns about its technical and commercial viability.

“All gas projects that had been stopped are now being resurfaced,” Ana Maria Jaller-Makarewicz, an energy expert at the Institute for Energy Economics and Financial Analysis (IEEFA), told Al Jazeera, adding that energy companies are aggressively lobbying the EU.

“EastMed could be economically viable now because energy prices are very high, but it likely won’t be in the long term,” the expert added.

Meanwhile, she said cleaner and cheaper options are being ignored. “There is so much interest in building new energy terminals, even though we can more easily reduce demand,” Jaller-Makarewicz said, citing heat pumps as one way of achieving this objective.

While new energy solutions must be found, investing in long-term infrastructure in a fractured region risks turning the eastern Mediterranean into the eye of a new geopolitical storm.

“One must ask, is this really worth it?” Jaller-Makarewicz said.