U.S. Natural Gas Dominance May Be Coming To An End

The is the fourth article in a series on BP’s recently-released Statistical Review of World Energy 2021. Previous articles provided an overview of this year’s Review, an examination of the data on carbon emissions, and a look at oil supply and demand trends.

Today I delve into the data on natural gas production and consumption.

U.S. consumption has grown rapidly as power plants have turned increasingly to natural gas as both a replacement for coal-fired power and a backup for new renewable capacity.

The net impact of growing natural gas supplies and conversion of power plants has caused natural gas to become the fastest-growing fossil fuel. Over the past decade, global natural gas consumption has grown at an average annual rate of 2.9%, versus 1.5% for oil and 0.9% for coal. 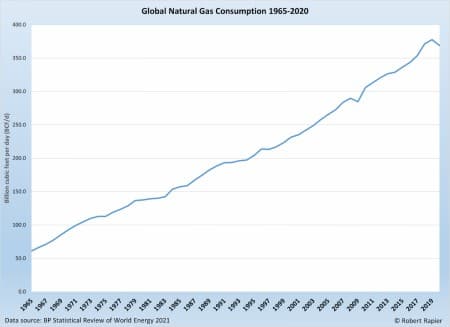 Production fell sharply in 2020 in response to the Covid-19 pandemic. The only comparable decline came during the 2008 housing crisis, after which consumption growth returned to its normal trend.

The U.S. has consistently been the world’s top natural gas consumer since 1965. In 2020, the Top 10 consumers were exactly the same as in 2019, except Mexico and Germany switched positions. 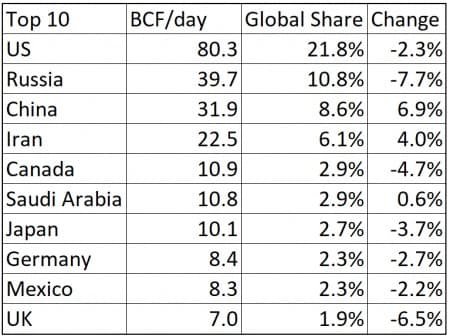 Within the Top 10, China, Iran, and Saudi Arabia all increased consumption from 2019.

Among all countries, the U.S. moved into the lead for natural gas production in 2011, and has since substantially grown that lead. In 2020, U.S. production declined by 1.9% in response to the Covid-19 pandemic — which negatively impacted gas prices — but the U.S. retained a commanding 23.7% share of global production. 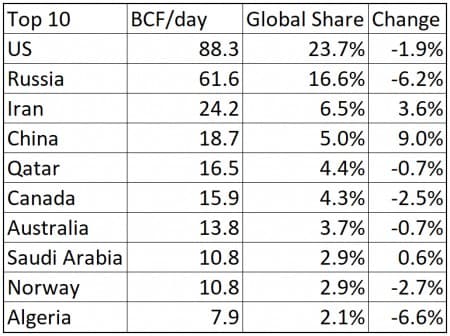 To put U.S. production into perspective, the 88.3 billion cubic feet per day (BCF/d) the U.S. produced in 2020 was greater than all Middle East natural gas production (66.3 BCF/d). The Top 10 producers were the same as in 2019, except China leap-frogged Qatar on the back of a substantial 9% increase in its country’s production.

Another result of the boom in natural gas production has been substantial growth in the gas exports of certain countries. U.S. exports, both via pipeline and as liquefied natural gas (LNG), have surged over the past 10 years. U.S. LNG exports grew last year to 61 billion cubic meters (BCM). For perspective, in 2010 that number was 1.5 BCM. The U.S. is now the 3rd largest LNG exporter, behind Australia (106.2 BCM) and Qatar (106.1 BCM).

Pipeline exports from the U.S. have also surged, nearly tripling over the past decade to 76.1 BCM. Mexico has been the largest growth market for pipeline exports, with 54.3 BCM of the total in 2020. Canada was the other destination of U.S. pipeline exports at 21.8 BCM.

The U.S. may continue to lead the world in natural gas production for a few more years, but the level of proved natural gas reserves implies that our lead could be short-lived.