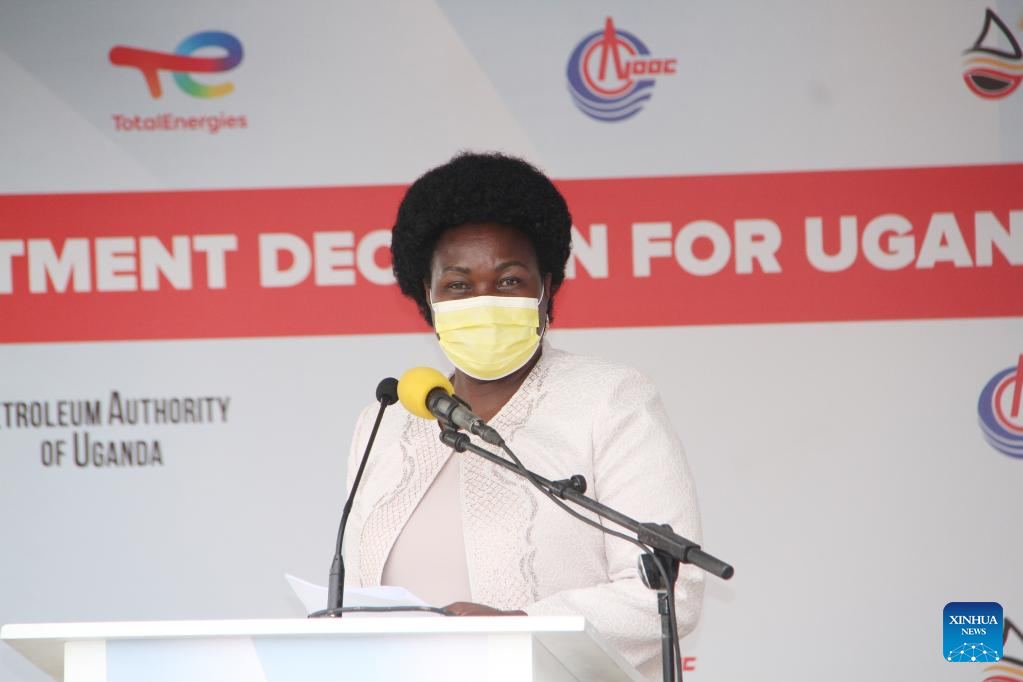 The Ugandan government and its oil and gas partners have announced their final decision to proceed with the development of the country’s oil and gas projects after years of setback that threatened the East African nation’s efforts to become oil exporter.

The China National Offshore Oil Corporation (CNOOC) and the French energy conglomerate, TotalEnergies, say the investment in Uganda will be more than US$10billion.

The President of Uganda, H.E Yoweri Kaguta Museveni, on Tuesday, February 1, 2022, witnessed the announcement of the final investment decision (FID) for the oil and gas projects.

The ceremony, which took place at the Kololo Independence Grounds in Kampala, was also attended by Her Excellency Samia Suluhu Hassan, the President of the United Republic of Tanzania.

The announcement of FID comes after the signing of key agreements including the Shareholders Holders Agreement (SHA), Tariff & Transportation Agreement (TTA) and Host Government Agreements (HGA) for the East African Crude Oil Pipeline (EACOP), and subsequent launch of the projects in April 2021.

In a statement, Dr Ruth Nankabirwa Ssentamu, Minister for Energy and Mineral Development, remarked that “This officially marks the beginning of the detailed Engineering, Procurement and Construction (EPC) phase by the Joint Venture Partners and, therefore, a commitment to see first oil by 2025, a journey that started in 2006. It is during this phase that we expect Ugandans to accrue significant benefits and opportunities from the sector through local content.”

The FID announcement signifies the commitment of the oil companies to invest close to US$10 billion to develop Uganda’s oil and gas resources through the implementation of the Tilenga Project in Buliisa and Nwoya districts; the Kingfisher Project in Hoima and Kikuube Districts (approximately US$6-8bn); and, the East African Crude Oil Pipeline (EACOP) that will cross the ten (10) districts of Hoima, Kikuube, Kakumiro, Kyankwanzi, Gomba, Mubende, Lwengo, Sembabule, Kyotera and Rakai in Uganda.

This is in addition to the government’s consistent efforts in improving infrastructure required to support the oil and gas developments by constructing the Hoima International Airport (approx. US$800m) with works currently at close to 70 per cent completion of the first phase and 700 kilometres of oil roads (approx. US$900m).

According to Mr Ernest N.T. Rubondo, Executive Director, Petroleum Authority of Uganda (PAU), contracts worth US$ 6 billion for over 40 work packages for the Tilenga, Kingfisher and EACOP projects have been submitted by the licencees to the PAU for approval before award.

“The scope of companies being regulated by the Authority is increasing significantly to include world-class contractors who are setting up base in Uganda, implying an increase in investment in the country, and opportunities for local entrepreneurs and high-level employment of skilled Ugandans. Ugandans should therefore continue preparing for the direct and indirect opportunities that are now becoming visible,” he said.

The Third National Development Plan (NDP III) lists oil and gas as one of the sectors to propel Uganda from a predominantly low-income to a competitive upper-middle-income the country through revenue generation, infrastructure development and job creation. The announcement of FID is, therefore, in line with the country’s Sustainable Development of Petroleum Resources Programme under NDP III, whose goal is to attain equitable value from the petroleum resources and spur economic development in a timely and sustainable manner.

“FID is one of the important steps in Uganda’s journey to First Oil as it signifies that Uganda’s oil and gas sector remains profitable, even amidst the challenges related to the volatile crude oil prices and the ongoing COVID-19 pandemic. FID, therefore, unlocks the single highest value project in the country, that will bring in an investment of close to $15bn in the next three years within Uganda,” Irene Batebe, Permanent Secretary Ministry of Energy and Mineral Development said.

Today is a historic day for TotalEnergies EP Uganda. This Final Investment Decision materializes after more than 6 years of intense effort from all our teams in close coordination with the Government of Uganda. It is a moment of great satisfaction and the excitement which also comes with the responsibility to deliver, together with our partners these projects on time and in compliance with the highest standards, while ensuring sustainable value retention in the economy through promotion of national content. The journey ahead of us is still long but we are, more than ever, fully committed to making it a great success for all, working together with our stakeholders,” Mr Philippe Groueix, General Manager TotalEnergies EP Uganda, said.

“Achieving FID for the Kingfisher Project is a great milestone to advance the development of the oil and gas resource in Uganda. The diligence, leadership and support with key stakeholders have largely contributed to the attainment of this breakthrough” stated Mr Chen. Zhuobiao, President, CNOOC Uganda Limited.

“We are extremely delighted today that as a country we have reached this stage. With the reaching of FID, UNOC will now fully represent the Government of Uganda as the commercial arm in Uganda’s oil and gas sector in the journey towards first oil” Ms Proscovia Nabbanja, Chief Executive Officer UNOC”.