It seems that the global economy has been in a continuous state of flux this year. The headlines are repetitive to the point of being preposterous. This uncertainty has translated into high volatility that sent the fear gauge, VIX, to a 150-day high last month. It still remains elevated (albeit down from its recent peak), with most analysts seeming to fall into one of two camps. The first is worried about recession-induced demand destruction, while the second frets over the loss of supply. While both narratives have merit, in the short term it is demand destruction rather than a supply crunch that markets will have to deal with.

The primary question for both financial markets and oil markets today is whether or not the world will face a prolonged and deep recession. In the IMF’s latest World Economic Outlook 2022, the current slowdown is described as being both broad-based and sharper than expected. It leaves very little doubt as to the economic hardship ahead and suggests that the worst is yet to come. The IEA’s World Energy Outlook was similarly pessimistic about the current situation, describing the energy crisis as “a shock of unprecedented breadth and complexity”. The report defines it not as a transitory shock but a fundamental change that will continue to roil the global energy markets for years to come. Not delving into much detail, we are seeing the birth of a new energy order as energy flows shift from countries and regions. Coming back to global growth, inflation is expected to be ‘sticky’, meaning rising prices combined with a stagnating economy. As per the report, it will peak at 9.5 percent but it will come down to 4.1 percent in 2024. Many countries in the world are already facing soaring levels of inflation where figures are at multi-decade highs. The IMF sees economic growth weakening next year.

In Europe, the UK’s economy has already started to contract as the BoE raised interest rates to the highest level in 60 years trying to avert what might be the “longest recession ever”. The economy shrank by 0.2 percent in the last three months. Germany, the powerhouse of Europe, is struggling to absorb shocks from a double whammy of rising prices and the energy crisis.

conomic indicators from the country do not look promising. 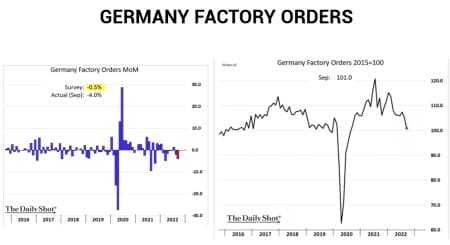 A trend that can be seen across Europe. 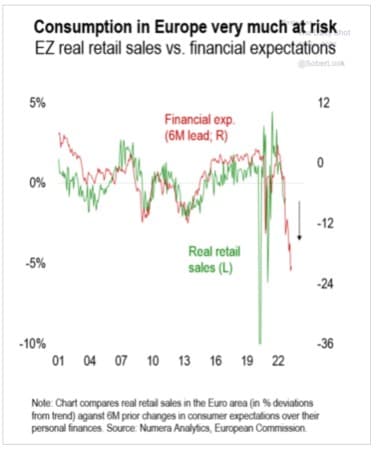 Steve Hanke from Johns Hopkin university has recently joined the chorus of famed economists warning of an impending recession as he sees a more than 90 percent chance of a severe recession. Another metric used to bolster the case for a recession is the reduction in M2 supply which recently hit the lowest level in the past 37 months. 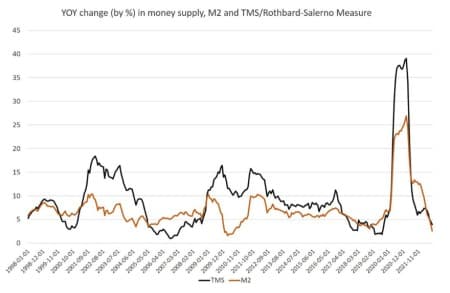 Another indicator, True Money Supply (TMS), developed by Murray Rothbard and Joseph Salerno is an effective measure of tracking money supply. Historically, whenever the difference between M2 and TMS moves into a negative territory a recession follows. The gap has been in the negative for the past 5 to 6 months. 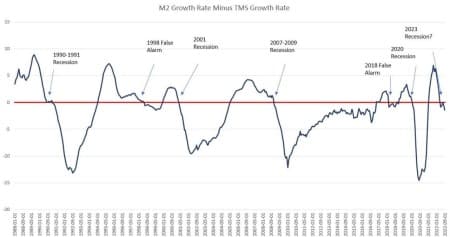 Shifting our focus to the supply side, recent data from Vortexa show that there has been an increase in oil exports from the Atlantic Basin. The U.S., Algeria, Guyana, Brazil, and Libya exported a combined 7.6 mbpd in October as compared to 7.1 mbpd in September. 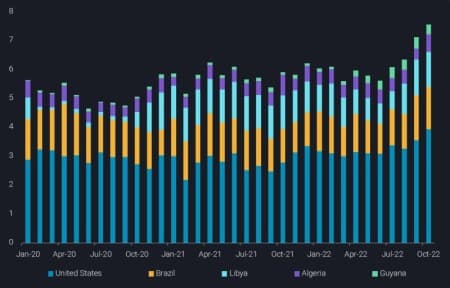 While that increase in production will in no way make up for the coming decline in OPEC+ output, it is not insignificant. Meanwhile, in OPEC’s monthly oil report which came out recently, the group added to the chorus of voices warning of demand destruction. The cartel shed 400,000 bpd from their fourth quarter oil demand estimates as they see it growing by only 2.5 mbpd. They have cut their oil demand forecast for 2023 by 100,000 bpd to a total of 2.2 mbpd. It was interesting to see, but not surprising, that oil markets were in a supply surplus in the last few quarters. In terms of economic risks, the report substantiates the above discussion as it agrees that downside risks remain in the global economy.

In the short- to medium-term, a global monetary tightening, falling output, and the increased risk of countries entering into recession will continue to keep oil demand in check. That is before taking into account the continued Covid problems in China. The issue of a supply crunch will be kept at bay in the short term as a result of these developments. In the longer run, however, there are plenty of factors that could lead to a major supply crunch, factors we will outline in our next article.